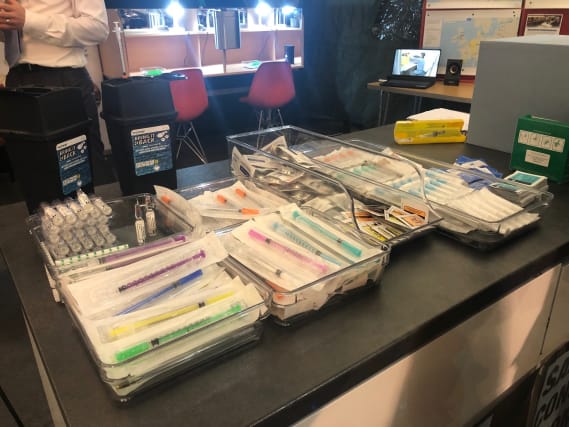 Safer consumption rooms should be installed in Glasgow to combat an “unprecedented spike” in drug deaths, a conference highlighting the problem has heard.

Held at Glasgow’s SEC on Wednesday, the Scottish Government and Glasgow City Council event welcomed around 350 delegates in what local authority leader Susan Aitken hailed as a “landmark event” but also a “challenging day”.

During the event, which is being held ahead of a UK-Government organised drugs summit tomorrow, safer consumption facilities in countries such as Canada and Switzerland were highlighted.

The UK government’s Home Office has refused to allow the facilities in Glasgow.

The city accounted for around a third of Scotland’s 1,187 drug deaths in 2018 – among Europe’s highest and the most in the UK – something Ms Aitken said needed an “emergency response”.

She told the conference: “A cohort of ageing long-term intravenous heroin users and the emergence of new cheap poly drugs is fuelling an unprecedented spike in drug-related deaths here.

“We can lead the way for the rest of the UK while ensuring this crisis is first addressed where it most acute.

“The underlying causes to this crisis are complex and varied, such is the scale and persistence of the problem that no single intervention will have a transformative impact by itself.”

She added: “Previous efforts to address the issues around injecting drug use have floundered.

“New approaches are now necessary to target those most at risk. Glasgow again has to be bold and innovative.

“International evidence tells us (a safer consumption room) is the most impactful intervention to reduce harm and improve health.

“Glasgow is ready and willing to work constructively with both governments to find solutions that save lives and build better futures.

“We won’t stay quiet if we believe solutions are not being properly resourced or if the door is closed in our faces. Nothing can be off the table.”

A demonstration of the consumption rooms was held before the conference began, which include various syringes and swabs and Naloxone injections, which are used to help revive people who have had a drugs overdose.

The Home Office has previously refused to grant the powers needed to make such a facility legal.

Despite this an Enhanced Drug Treatment Service – Scotland’s first addictions service – was licensed and at the end of last year started treating patients with pharmaceutical-grade heroin in Glasgow city centre.

The conference also heard about the recent HIV outbreak that began in 2015.

But it is feared that the actual number may be much higher as many drug users do not engage with needle exchange services that offer blood tests.

With a “clear link to public injecting and the recent HIV outbreak”, she again backed the cause for consumption rooms.

It is hoped the discussion around the such facilities will carry over to a similar UK Government drugs summit being held at the same venue on Thursday.

Public health minister Joe FitzPatrick told the conference: “The problem we’re all here to discuss is as brutal as it is simple.

“The solutions may be complex but they must be found otherwise this senseless carnage will continue.

“We must address the impact of drug use in a way that is public health-led rather than just as a justice issue.

“This is not a view that is universally held but it is one that has shown real benefits around the world.”

He added: “What matters is saving lives and I will work with anyone to achieve that.

“Tomorrow the UK Government will be hosting a summit in this same building – I want to be able to bring Scotland’s experience directly to that meeting.”

Speaking to the audience, he said: “You are Glasgow’s front-line in this public health emergency.

“There is some fantastic work going on up and down our country and our Drugs Deaths Taskforce has started its work, making recommendations and new actions are under way as a result.

“But we want to go further. We must go further. Collectively you are Scotland’s best hope for saving lives which would otherwise be lost to drugs.”