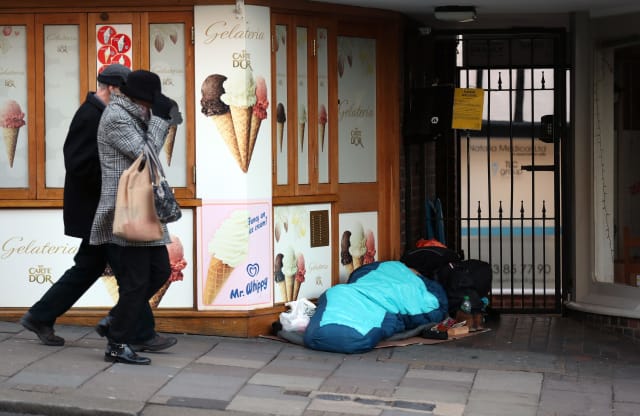 A £236 million initiative aimed at helping get rough sleepers off the streets has been unveiled by the Prime Minister.

As part of the move, Boris Johnson said that former “homelessness tsar” Dame Louise Casey would conduct a review of the situation regarding rough sleeping as an “independent adviser”.

The funding will go towards providing “move-on” accommodation for up to 6,000 rough sleepers.

Dame Louise will be tasked with providing the Government with advice on action required to end rough sleeping by the end of this Parliament in 2024.

Housing Secretary Robert Jenrick will also get a Parliamentary Private Secretary with specific responsibility for rough sleeping, with Adam Holloway appointed to the role.

Speaking ahead of a visit to a homelessness charity on Thursday, the PM said: “It is simply unacceptable that we still have so many people sleeping on the streets and I am absolutely determined to end rough sleeping once and for all.

“Today I’ve announced extra funding to help thousands more people get off the streets and I have appointed Dame Louise Casey as an adviser to undertake an urgent review into the causes of rough sleeping and provide expert advice on vital next steps.

“We must tackle the scourge of rough sleeping urgently and I will not stop until the thousands of people in this situation are helped off the streets and their lives have been rebuilt.”

Downing Street said the new funding would bring suitable housing forward by acquiring new units, refurbishing existing ones and leasing private rented sector properties specifically for those who are rough sleeping or at risk of rough sleeping.

Dame Louise said: “Homelessness, and within that rough sleeping, is something that causes misery, so I hope that I will be able to help the Government and the country expedite action on this issue.”

Mr Jenrick said: “I’m determined that we end rough sleeping in this Parliament, meeting our moral obligation to support the most vulnerable in society.

“We will be bringing together housing, addiction, mental health and the criminal justice system as never before to tackle this social ill from every angle.

“The co-ordinated effort that we will now pursue, beginning with this review, builds on the progress we have made in recent years, reducing the number of people sleeping on the streets.”

Dame Louise has previously served in a number of Whitehall roles, including as director general of the Troubled Families Team.

The move comes as the Ministry of Housing, Communities and Local Government publishes annual figures on rough sleeping in England on Thursday.

She said: “Sleeping rough can be dangerous and deadly, so it’s absolutely right that the Prime Minister wants to tackle it head on.

“There is no great secret about what is causing this emergency.

“As we see in our services day in and day out, most people are tipped into homelessness simply because there are not enough affordable, safe, and secure homes in this country.

“The bottom line is people can’t afford to live anywhere – a problem made infinitely worse by a dire lack of social homes and cuts to housing benefit.

“On top of this, cuts to local mental health and social care services have removed much needed support for many people in crisis.

“Emergency measures to get people off the streets quickly and housing first pilots can only go so far, if you don’t have the stable homes to back them up.”