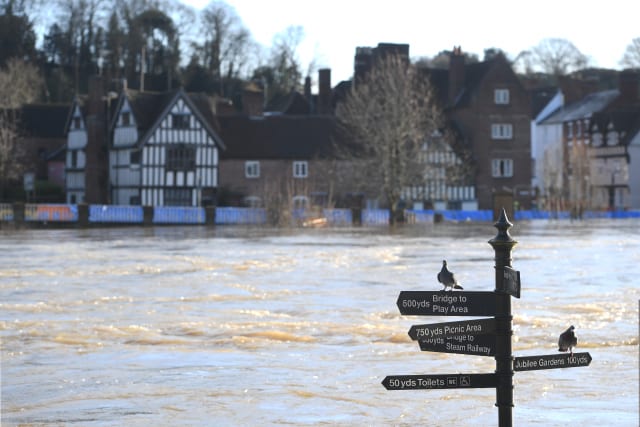 There is no let-up in sight for flood-hit communities in Shropshire and Worcestershire after heavy rain overnight caused the River Severn to breach emergency defences.

More wet weather is forecast in some of the worst-affected areas, with parts of Wales and the North West of England predicted to see another 0.8in to 1.6in (2cm to 4cm) of rain, according to the Met Office.

Railway lines into Shrewsbury were closed due to the rising water levels close to the viaduct.

Network Rail said: “The exceptionally high-water levels in the Severn and the closure of these lives serve to highlight the extreme weather we’ve experienced across the network over the last few weeks.

“The current situation in Shrewsbury is very much a once-in-a-generation event.”

It said engineers would be undertaking an underwater inspection of the viaduct’s structure on Wednesday morning before lines can reopen.

Residents in the Worcestershire town of Bewdley were forced to evacuate after the river spilled over barriers at Beales Corner.

Mark Bowers, a flood risk manager at the Environment Agency, tweeted: “Huge amounts of water in the system.

“Thoughts with the local community who have been impacted.”

In the at-risk town of Ironbridge in Shropshire, the force of the river forced flood defences backwards, although they managed to hold.

Shortly after 1am on Wednesday, Chief Superintendent Tom Harding, of West Mercia Police, tweeted: “The barrier appears intact but has indeed moved. This will be monitored throughout the night.”

Roads around the Ironbridge Gorge have also been closed to stop people driving in floodwater, Telford and Wrekin Council said.

In the North East, flood warnings remain in place in the Snaith area, in East Yorkshire, ahead of a high tide on Wednesday morning.

The Environment Agency said the washlands at Gowdall Ings are continuing to fill and are overtopping, as designed, into Snaith Ings, with flooding affecting properties nearby.

Hull Coastguard Rescue Team joined other agencies, including police, fire and ambulance services, on Tuesday night to alert residents and help with evacuations.

On Tuesday, East Riding of Yorkshire Council said that 10 properties – seven commercial and three residential – had flooded in Snaith and the road north of the town had been closed.

The Snaith School said it will be closed on Wednesday as a precaution and Snaith Primary School also remains closed.

On Wednesday morning there were two severe flood warnings – meaning there is a risk to life – on the River Severn.

There were a further 102 flood warnings and 146 flood alerts in place stretching from the Lake District down to the south coast, with heavy concentrations in the North East and South West.

Many towns the length of the River Severn were also at risk.

Vulnerable people will get priority supermarket delivery slots from next week