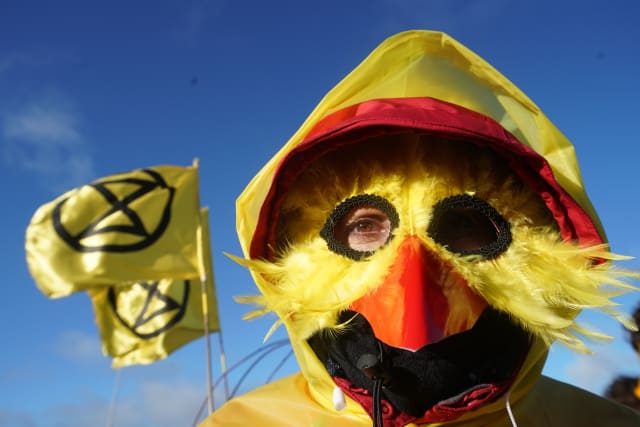 A mining group has hit back at Extinction Rebellion protesters who blockaded their site, calling them “privileged” and “ill-informed”.

Four “human canaries” in wire cages were joined by dozens of other campaigners at the entrance of the Bradley opencast mine outside Dipton, County Durham.

There was a flashpoint between protesters and security staff when one tried to get under a barrier fence but was stopped from getting in, as a guard dog barked noisily beside him.

Extinction Rebellion campaigners chanted: “We are non-violent”, while the man was prevented from getting under the fence.

One of the canaries, who declined to give his name, said: “If things got unsustainable for life underground, the canaries down the mine used to peg it before the miners did.

“Here we are, trying to stop the coal mine because there’s no need for coal.”

But the Banks mining company said coal was necessary for the steel and cement industries, and if it was not produced in Britain, even more would be brought in from Australia or Russia.

Mark Dowdall from The Banks Group said: “XR’s ill-conceived demands will directly exacerbate the problem they are looking to solve.

“Until viable alternatives are in place, five to six million tonnes of coal will still be needed each year in the UK as a raw material for our steel and cement industries, so that we can build much-needed infrastructure including new wind and solar farms, houses, roads and railways.”

Mr Dowdall said it did not make environmental sense to import coal, adding: “The privileged, ill-informed XR protestors, most of whom are once again from outside the area and who are causing more disturbance to local residents than our operations ever have, would be more effective protesting against imports of Russian, American and Australian coal rather than counter-productively threatening much-needed regional investment and the livelihoods of hard-working northern families.”

Extinction Rebellion has promised three days of action at the site, heralding 40 days of protest during Lent.

They are calling on Durham County Council and the Government to reject the Banks Group’s application to expand the mine, ahead of the planning committee meeting next month.

The campaigners said that extending the mining operation went against the commitment to phase out coal in 2025 and to become carbon neutral by 2050.

“Now they need to show us that they mean it.”

Chris Riches, 19, an Extinction Rebellion co-ordinator at Newcastle University, said: “It amazes me that we’re in 2020 and still there are companies applying to dig up more coal even though to meet the 1.5 degree target of global warming, 80% of it must stay in the ground.”

Durham Police was monitoring the protest and warned drivers that the A692 could be affected.