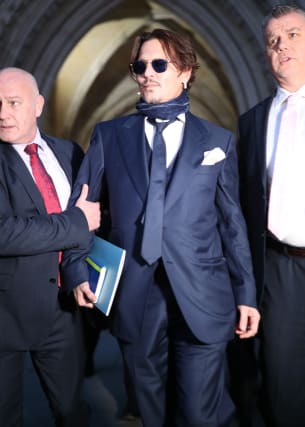 Johnny Depp’s lawyers say the star hopes to achieve “vindication” at a “public trial” over allegations he was abusive to ex-wife Amber Heard.

The Hollywood actor is suing the publishers of The Sun and its executive editor, Dan Wootton, over an article which alleged he was violent and referred to him as a “wife-beater”.

At a hearing in London on Wednesday, lawyers for Mr Depp, 55, said a High Court judge will have to resolve who is “telling the truth” about their relationship.

In court documents prepared by his legal team, his barrister David Sherborne said: “Mr Depp states that he has never physically assaulted his wife, that the alleged incidents of violence on his part has been invented and that actually it was Ms Heard who was physically violent in the course of the arguments which took place during their marriage.

“Ms Heard claims that Mr Depp physically assaulted her, that she sustained serious injuries as a result and that she was never physically violent towards him at all.

“Plainly, one of them is not telling the truth.”

He added: “As already stated, one of them is lying and doing so on a grand scale.

“Even in this action, further allegations have been made against Mr Depp by a series of amendments (to the case) on the basis presumably of Ms Heard’s evidence, including new incidents which have never been alleged before.

“It is a very important function therefore of this libel trial that these allegations are tested, and either proved or disproved so that the truth or falsity of them is clearly established.

“This is a hugely significant factor for Mr Depp, namely to achieve vindication for these widely publicised allegations at an equally public trial.”

The libel claim, against News Group Newspapers and Mr Wootton, arises out of publication of an article in The Sun in April 2018 under the headline “Gone Potty How can JK Rowling be ‘genuinely happy’ casting wife-beater Johnny Depp in the new Fantastic Beasts film?”

Mr Depp, wearing a suit and blue-tinted glasses, sat in court behind his lawyers throughout the hearing, which dealt with case management issues ahead of a 10-day trial set for March 23.

Mr Justice Nicol, who heard a series of applications from both sides, said he will give his ruling on the pre-trial issues at a later date.

Earlier during the hearing, Mr Sherborne said the evidence in the case is “diametrically opposed”.

The barrister told the court Ms Heard’s allegations date back to the early stage of the couple’s relationship in 2013, before they married in 2015.

He also referred to recordings of Ms Heard, 33, which recently came to light, in which she appears to discuss having been physically violent towards Mr Depp.

Mr Sherborne said that evidence “demonstrates in her own voice that she was not a victim of domestic abuse, but rather that she was the aggressor”.

He added that, in the recordings, Ms Heard is apparently heard to say that no-one would believe Mr Depp if he claimed to be a victim of domestic violence.

The court heard a number of witnesses will either attend the trial or appear over a video link, many from California, to give evidence in support of either Mr Depp or Ms Heard.

Lawyers representing News Group Newspapers told the court that texts sent by Mr Depp during his relationship with Ms Heard are “very damaging” to his  case.

He also wrote: “Let’s drown her before we burn her!!! I will f*** her burnt corpse afterwards to make sure she is dead.”

Mr Sherborne said there is “no single smoking gun” in any of the evidence disclosed so far which supports Ms Heard’s claims Mr Depp was violent.

Mr Depp has brought separate libel proceedings against Ms Heard in the US, which Mr Sherborne said are “ongoing”.

Mr Depp and Ms Heard met on the set of 2011 comedy The Rum Diary and married in Los Angeles in February 2015.

In May 2016 Ms Heard obtained a restraining order against Depp after accusing him of abuse, which he denied.

The couple settled their divorce out of court in 2017, with Ms Heard donating her seven million US dollar (£5.5 million) settlement to charity.