Call to cancel Ireland vs Italy rugby game ‘not made lightly’ 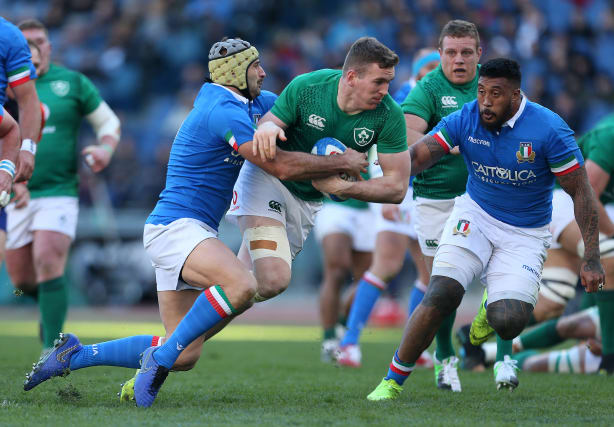 Ireland’s chief medical officer has said the decision to call for the cancellation of the Ireland vs Italy Six Nations rugby match due to the risk posed by coronavirus was “not made lightly”.

Tony Holohan said it was “the only responsible decision that could have been made”.

On Tuesday the Department of Health’s National Public Health Emergency Team recommended the match scheduled for March 7 should be postponed.

Dr Holohan told Morning Ireland: “This won’t be the only mass gathering that we will look at but this is one that is coming quite soon, and obviously involving an area in Europe that has been added to the list of (affected) countries.

“We could make no other responsible advice or decision.”

His comments came as Minister for Health Simon Harris met representatives from the Irish Rugby Football Union (IRFU) to discuss next Saturday’s game.

Dr Holohan also said he would not be recommending restricting foreign travel.

He said: “We don’t think that would be a proportionate measure, WHO (World Health Organisation) is not recommending cancellation or restrictions on foreign travel.

“We make specific travel advisories available and in this country we do that through the Department of Foreign Affairs.

“I think the IRFU is a responsible organisation and would be willing to work with us… no one wants to find themselves in a position of having to cancel or recommend (a match) not taking place.

“I’m sure they, as a responsible organisation, will be – just as we are – minded to act in the interests of health and welfare, not only for their spectators but players.

Asked if the game should be played behind closed doors, Dr Holohan said: “That would be a matter for them.”

Transport Minister Shane Ross said that while he cannot stop rugby fans travelling from Italy to Ireland, he did not want to encourage mass gatherings.

“You certainly don’t want to encourage them to gather in a big arena,” he told RTE.

“But you can’t stop them coming – that would be absolutely wrong.

“We are keeping the border open, we are not going that far. But we are certainly not going to encourage measures which are going to heighten the risk.”

In 2001, a number of Six Nations games were postponed due to a foot-and-mouth disease outbreak.

In a statement, the IRFU said: “The IRFU is seeking an urgent meeting with minister Harris as to the specific reasoning behind calling for the cancellation of the Ireland v Italy Six Nations fixture in the context of the Government’s overall travel policy to and from Italy and other affected countries.

“Until such time as the IRFU has had contact with the minister and gets an understanding of the Government’s strategic policy on travel to and from Ireland and the cancellation of mass gatherings, it is not in a position to comment further.”