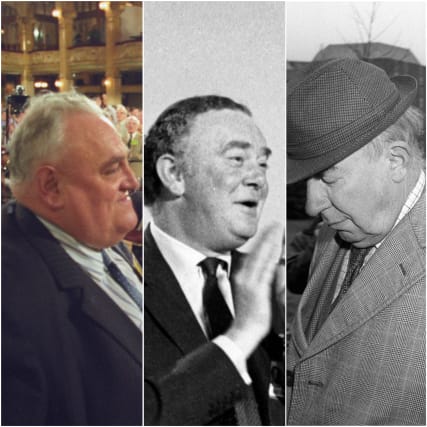 Here are some of the famous names mentioned in the latest report from the Independent Inquiry into Child Sexual Abuse, which identified a string of failings and cover-ups within Westminster and beyond, dating back decades.

The rotund former Rochdale MP died in 2010, prompting a slew of allegations that he had abused children for decades.

The inquiry heard evidence from Westminster insiders that his criminal behaviour was known, or at least that he was rumoured to be active in his sexual interest in children, but was protected from prosecution in a number of ways.

A retired police officer told the inquiry that his team had enough evidence to prosecute Liberal MP Smith in the 1970s for his involvement in sexual activity with young boys, but that progress of that investigation was thwarted by senior officers at the time, who claimed that it was “too political”.

He was knighted in 1988, almost two decades after he was first investigated by police for abusing boys at a hostel in the town.

He later confirmed to at least one witness that stories in the Rochdale Alternative Paper and Private Eye were “correct”.

The Chester MP until 1992 held a number of posts within Margaret Thatcher’s government, though it was said he was known to like “little boys”.

In the late 1980s an allegation arose that Morrison had been removed by police officers from a train in Crewe for sexually molesting a 15-year-old boy.

However, the inquiry heard great efforts were made to suppress these rumours rather than conduct any more formal investigation, with the Tories’ constituency agent meeting with the Labour counterpart to agree not to mention it during the election campaign in 1987.

Despite the seriousness of the rumours and the alleged incident on the train, no one considered the potential fate of children – the inquiry said “the focus of attention remained unswervingly on political consequences rather than the welfare of the child”, and Tory Morrison’s career was undamaged.

The 10th Earl of Sandwich and former South Dorset MP was let off with a caution after a “simple” 10-year-old boy alleged he had been indecently assaulted by the Tory.

Montagu broadly agreed but denied the relationship was sexual.

The inquiry found that “significant leeway was given to Montagu” as a well-known aristocratic landowner, and that “a patronising attitude was shown by the police and the Director of Public Prosecutions’ office towards a working-class victim”.

Montagu’s son Robert, who was repeatedly sexually abused by his father, said the decision not to prosecute was “entirely wrong”.

– Sir Peter Hayman
The former High Commissioner to Canada was a member of the Paedophile Information Exchange, a controversial organisation campaigning to legalise paedophilia in the late 1970s.

The inquiry found he was the beneficiary of “preferential, differential and unduly deferential treatment” over claims he sent obscene material in the post, following a meeting between his solicitor and the then-director of public prosecutions.

However, his two co-defendants – one of which was a bus inspector – were prosecuted.

The more recent case of the Challenors highlighted existing issues with a lack of safeguarding within political parties, the inquiry found.

It heard evidence that Green party candidate Aimee was able to appoint her father David to be her election agent in 2017, despite the fact he had been charged with 22 offences including rape.

She subsequently told two party communications officials via a message on Facebook, and did not mention they related to children, the inquiry heard.

He was later convicted and sentenced to 22 years’ imprisonment after being convicted of 20 counts.

The country’s first female prime minister from 1979 to 1990, Margaret Thatcher (later Baroness) was accused with ex-Conservative party chairman Norman (now Lord) Tebbit of being aware of rumours about her Parliamentary Private Secretary Morrison having “a penchant for small boys” but did nothing about it.

The report said the allegations “should have rung alarm bells in government”.

It also said that she pressed for a knighthood for disgraced entertainer Jimmy Savile for a number of years but it was not considered appropriate to award it because of revelations in the press about Savile’s private life.

Speaking from his in Bury St Edmunds on Tuesday, Lord Tebbit said: “Since they choose to criticise me I will not comment on it, OK.”

The launch of the Met’s Operation Midland in 2014 saw dawn raids on the homes of the late Lord Bramall, the late Lord Brittan and former MP Harvey Proctor following a series of allegations by Carl Beech – known during court proceedings as “Nick” – which were later discredited.

Beech is serving an 18-year prison term for 12 counts of perverting the course of justice and one count of fraud.

It was during Prime Minister’s Questions in 2012 that Mr Watson, who is no longer an MP, claimed there was “clear intelligence suggesting a powerful paedophile network linked to Parliament and Number 10”.

Mr Watson, who stood down as an MP in 2019, was later accused of being the “cheerleader in chief” of the false claims.

The inquiry report also dismissed Mr Watson’s claims, stating: “Despite the Inquiry engaging in an extensive evidence-gathering process, we have seen no material indicating the existence of a Westminster ‘paedophile ring’.”