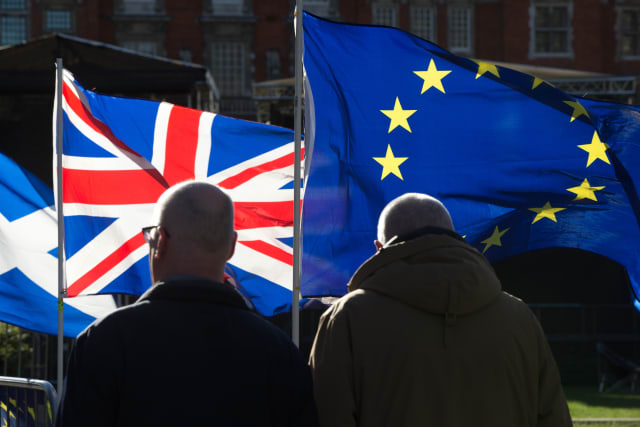 Britain has been warned it faces a “tough road ahead” in post-Brexit trade talks as European ministers gather in Brussels to prepare to sign off on their red lines.

The EU General Affairs Council is meeting to approve the bloc’s mandate for negotiations with the UK – which are set to start next week.

Meanwhile, in Westminster, Boris Johnson will chair a meeting of senior ministers on his Brexit committee ahead of the publication of the UK’s negotiating position on Thursday.

Dutch foreign minister Stef Blok, arriving at the meeting in Brussels, warned of the “immense” time pressure facing both sides as they attempt to agree a future trading relationship.

“The past has shown that we managed to do good work as a united European Union with regard to the Withdrawal Agreement, so that gives me hope for the negotiations to come,” he told reporters.

“But the time pressure is immense, the interests are huge – it’s a very complicated treaty – so it will be very hard work. A tough road ahead.”

Simon Coveney, Ireland’s foreign minister, said the EU was making a “generous and fair” offer to the UK, but warned Mr Johnson not to renege on the commitments made in the Withdrawal Agreement.

He said: “Michel Barnier and the Irish Government are at one on this: the Withdrawal Agreement involves significant commitments in the context of Northern Ireland through the Irish protocol that both the EU and the UK need to follow through on.

“If that doesn’t happen, then I think it will damage significantly the prospects of being able to get even a bare-bones trade agreement along with a number of other things that need to be done in place by the end of the year.”

His comments follow reports that the Prime Minister has ordered his Brexit team to find ways to “get around” the Northern Ireland protocol which aims to avoid the introduction of a hard border on the island of Ireland.

Mr Barnier, the EU’s chief Brexit negotiator, wrote on Twitter: “We will keep a very close eye on the implementation of the Withdrawal Agreement – this will be key for building a solid future partnership with the UK.”

Croatia’s European Affairs minister, Andreja Metelko-Zgombic, said the EU would be willing to offer a “substantial” and “ambitious” partnership in post-Brexit trade talks with the UK.

“Today’s General Affairs Council will adopt a mandate for the future relationship with the UK – and from our side we are really willing to offer a substantial, ambitious, balanced and wide-ranging partnership,” she said.

The EU’s negotiating mandate will be published later on Tuesday.

British ministers are expected to seek a Canada-style agreement with zero tariffs, a proposal Mr Johnson and his Europe adviser, David Frost, have set out in speeches in recent weeks.

But the push for a Canada-style deal could set up a clash with the EU after Mr Barnier ruled out such an agreement.

He has previously said the UK is too close in proximity to be permitted to compete with the other 27 member states on such terms.

The Prime Minister’s official spokesman, asked about the trade talks on Monday, said: “The UK’s primary objective in the negotiations is to ensure that we restore our economic and political independence on January 1 2021.”

Mr Frost and his team will head to Brussels for the first round of negotiations on March 2.

One of the flashpoints expected with the forthcoming publication of the EU’s negotiation mandate is on fishing, with leading member states speaking regularly about wanting continued access to UK waters.

Mr Johnson used a speech in Greenwich earlier this month to announce that, once free of the EU’s Common Fisheries Policy, “British fishing grounds are first and foremost for British boats”.

But French Europe minister Amelie de Montchalin signalled that fishing would be a hotly contested topic when the two negotiating teams come to spar in London and Brussels over the coming months.

“The fishermen have the right to be protected; they know very well that if we sign a bad deal they will lose enormously,” she told TV station France 2.

A leaked draft of the EU negotiation mandate last week also included a stipulation that Britain should “return unlawfully removed cultural objects to their countries of origin”.

The passage is thought to refer to the Elgin Marbles – ancient Greek sculptures brought to Britain more than 200 years ago and now on display in the British Museum.

Greece has been vocal about demanding the return of the marble sculptures, which once adorned the Greek Parthenon temple, to Athens.

Downing Street has insisted that the future of the marbles is “not up for discussion as part of our trade negotiations”.

The PM is expected to meet Austrian Chancellor Sebastian Kurz at Number 10 on Tuesday as part of his diplomatic efforts with EU leaders before talks commence.