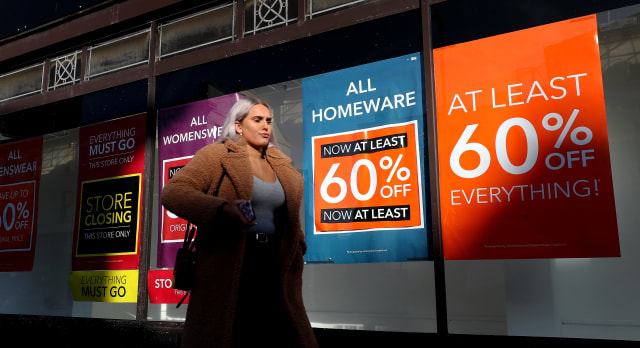 Shop prices have fallen faster this month after weak consumer demand drove more promotions and offers by retailers, according to figures.

The latest BRC Nielsen Shop Price Index revealed that prices have fallen 0.6% this month, compared with a 0.3% decline in January.

Non-food prices declined further during February, falling 1.9%, compared with a 1.5% decline in January.

Food price inflation remained steady at 1.6% for the month, with fresh food inflation easing to 0.6% from 0.7% in January.

Helen Dickinson, chief executive of the British Retail Consortium, said: “Consumers will welcome the fall in shop prices, which accelerated from the previous month, with non-food prices falling at their highest rate since May 2018.

“In contrast, some non-perishables, such as cereals, have caused overall food prices to rise.

“This is likely to worsen as global food prices have been growing at a double-digit rate for the past three months.”

The price of store-cupboard ingredients continued to rise, with ambient food inflation increasing to 3% in February from 2.8% the previous month

The figures come a week after the Office for National Statistics said inflation jumped to 1.8% in January while wage growth has continued to stall.

Mike Watkins, head of retail and business insight at Nielsen, said: “Whilst there was a slight increase in food prices this month, this is not going to change how we shop or what we buy, as the wider concerns that consumers have about their own finances continue to make them cautious about spending.

“But if consumer price inflation increases further over the next few months and if sales growth remain weak, then more retailers may need to compensate with extra promotions and deeper price cuts.”