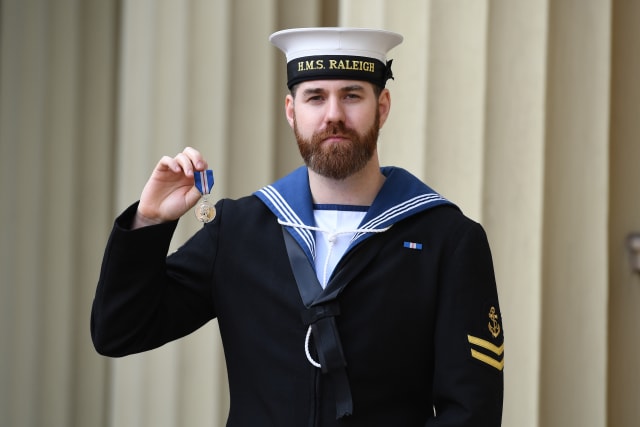 A Royal Navy sailor who saved 27 men from a burning ship was given a round of applause as he collected a medal for great courage at Buckingham Palace.

Leading Seaman David Groves spent at least four hours at sea trying to rescue every man on board a stricken 28,000-tonne merchant ship in the Bay of Biscay.

In the “worst conditions” he had ever faced, Leading Seaman Groves and the crew on HMS Argyll rushed to the aid of the Grande America after its cargo of containers and cars caught fire.

The sailor was awarded the Queen’s Gallantry Medal by the Duke of Cambridge at the palace on Tuesday, where the ceremony hall erupted into applause as details of the rescue were read out.

HMS Argyll, which was returning to Plymouth after nine months in the Asia-Pacific region, responded to a mayday call in March last year.

The Grande America became engulfed in flames around 150 miles from Brest, France.

“Travelling from the Argyll to the Grande America was quite intense. At one minute you couldn’t see at all, because there was a wall of water,” Leading Seaman Groves told PA.

“So you couldn’t see a massive burning ship, at night, and then obviously you’re on top of the wave and then you can see.

“From where we got deployed you could smell the toxic smoke.”

The crew on the stricken ship had abandoned it for a lifeboat, but the lifeboat’s engine was damaged when it hit the water.

Despite a swell of around 6m in the night sea, leading Seaman Groves entered the water in a small sea boat, which was used to “nudge” the lifeboat half a mile towards HMS Argyll.

“The nerves happened beforehand, at the time I don’t think I felt anything. It was just adrenaline keeping you going,” he told the PA news agency.

“The whole thing went by in a matter of seconds in my head, even though it ended at four in the morning.

“I think I crashed about two days later because the adrenaline was still going through me, so I didn’t sleep for two days because I was still pumped up.”

The Grande America’s crew – some of whom suffered smoke inhalation – were “in shock” but “massively grateful” after the rescue, he added.

Leading Seaman Groves, from Somerset, who was joined at the ceremony by his fiance and parents, said he felt “relaxed” when he collected his medal from the duke.

“He said it was good for everyone to hear my story, and that’s why they had done it, so he was just congratulating me,” he told PA.

“I’m obviously proud. It’s good to be recognised for these things, as there’s other people that do similar rescues.

“It’s good to be recognised and hopefully it gets done more.”