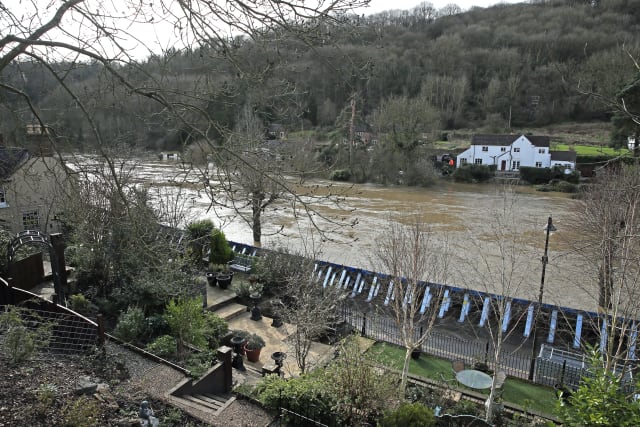 Flood-hit residents have been warned significant risks remain over the next few days in parts of England, with yet more rainfall expected.

The Environment Agency forecast ongoing flooding during the coming days, with England having seen more than 200% of its average February rainfall, and some areas experiencing a month’s worth of rain in 24 hours.

Low-lying areas along the Severn are forecast to be hit by severe flooding on Wednesday due to record-breaking river levels – with potential overtopping of defences of high concern in Ironbridge in Shropshire and Bewdley, Worcestershire.

And homes were evacuated on Tuesday after the River Aire burst its banks in Snaith, in East Yorkshire with social media users posting footage of water pouring over flood banks.

The Environment Agency is also warning that significant flooding is likely to continue along the Severn through to Friday as river levels will remain exceptionally high.

Meanwhile, flooding is also said to be possible on the rivers Wye, Ouse and Trent, with other areas at risk from localised flooding caused by heavy rainfall expected on Friday.

The flood warnings were issued after temperatures plummeted overnight across Britain, and forecasters warned of more ice and snow over the next 24 hours.

The mercury dropped to minus 4.5C at the Cairnwell in the Scottish Highlands, the Met Office said.

In a statement addressing the ongoing flood risk, the Environment Agency said: “Groundwater levels across parts of Dorset, Wiltshire, Hampshire and Sussex are continuing to rise and will lead to further flooding later this week.

“As of 12.30pm on Tuesday there are two severe flood warnings for Ironbridge and Shrewsbury, meaning there is an immediate risk to life.”

Flooding in central Shrewsbury forced the cancellation of train services between the Shropshire town and the West Midlands on Tuesday afternoon.

A spokesman for West Midlands Trains said extremely high water levels under a viaduct close to Shrewsbury station had forced Network Rail to close the line to the West Midlands from 2pm.

Jonny Wiseman, customer experience director for West Midlands Railway, said: “The safety of our customers and staff is of paramount importance and the extremely high water levels in Shropshire have forced Network Rail to shut the railway as a precaution.

“Passengers are advised to check their train before travelling and anyone travelling to or from Shrewsbury will need to allow extra time to complete their journey via road transport.

“We hope that water levels will drop enough for Network Rail to reopen the line by Wednesday morning but passengers are advised to check live travel information before setting out tomorrow.”

The Environment Agency, which has mobilised more than 1,000 staff per day since the start of Storm Dennis, is urging people to check their flood risk and remain prepared to take action.

Caroline Douglass, director of incident management at the Environment Agency, said: “Our thoughts are with all who have been and continue to be affected by the persistent and extreme weather.

“It is devastating to see your home or business flooded, and as the case is for some, be asked to evacuate.

“River levels remain exceptionally high and communities along the River Severn, in particular Shrewsbury, Bewdley, Bridgnorth and Ironbridge, should be ready for potentially severe flooding.

“River levels are also of concern on the lower River Ouse at Cawood.

“We urge people to stay up to date and listen to the advice of emergency services.”

Ms Douglass added: “We are in our fourth week of exceptional river levels and stormy weather.

“With the effects of climate change, we need to prepare for more frequent periods of extreme weather like this.

“People need to be aware of their flood risk, sign up to flood warnings, make a flood plan and not to drive or walk through floodwater.”