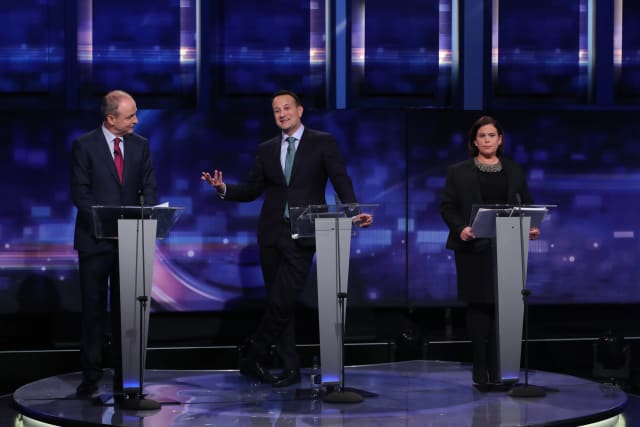 Fianna Fail leader Micheal Martin has said that a left-wing government is “very unlikely” as Sinn Fein will not emerge with the “credible numbers” in the Dail.

Mr Martin was speaking after he held a meeting with Fine Gael leader Leo Varadkar on Tuesday afternoon.

He claimed that the left wing alliance has failed to make any progress in the last week in their bid to form a government.

Mr Martin said: “Very clearly you can see the so-called left wing alliance that was trumpeted over a week hasn’t really made any progress in terms of numbers in the Dail.

“That remains a very unlikely scenario in terms of any combination on the far left, or Sinn Fein emerging with any credible numbers to form a government.”

He said that he was absolutely clear during his “preliminary meeting” with the Taoiseach on who Fianna Fail is in discussions with.

He said “Our view is that there is a need to put the government together to deal with the urgent issues.

“The one lesson from the public in this general election was that the issue of housing, health, climate change and others – people want action that brings about real change and real progress in relation to those issues.

“That’s what the public want and my view is that we have an obligation to try and meet the public’s demands in relation to those issues.

“Today’s meeting was a preliminary meeting with the Taoiseach.

“We are absolutely clear on who we are going in discussions with.

“We have agreed to meet again and there will be some reflection on today’s discussion.”

Mr Martin also met with the newly-formed Regional Independent Group made up of nine TDs.

He described it as a constructive meeting.

“The clear message from the independents was that they wanted a stable government that would last five years to deal with the key issues of housing and health and regional economic development,” he added.

“They have a strong focus on the imbalance in terms of how the country economically is developing.

“We pointed out that we begin tomorrow serious engagements with the Greens on a range of policy issues with our negotiating team and members of our front bench as well.”

It is the first time the two party leaders have met since the general election.

He added: “There is two aspects to that: could you achieve a critical mass that could sustain under a confidence-and-supply arrangement, and secondly would the dynamic be such that it would enable that government to take decisions that I think will be needed to make meaningful inroads on the housing crisis and on the health crisis and also climate change?”

After their meeting, Fine Gael issued a statement on behalf of Leo Varadkar.

“They exchanged views on a number of matters including; housing, climate change, health, cost of living, the economy and taxation,” it stated.

“Both sides agreed to meet again at a future point.

“The Taoiseach and President of Fine Gael encouraged Fianna Fail to continue engaging with other parties with a view to forming a Government.

Meanwhile the Tanaiste said that the coronavirus and ongoing Brexit negotiations add further urgency to forming a government in Ireland.

Simon Coveney was speaking in Brussels ahead of the special EU Council summit.

“Of course if we could have a government in place following on from the general election recognising the mandates that all parties have that would be great, but I’m afraid it’s not as simple as that, if it was we would making more progress on it.

“I think it’s going to take some more time to deal with the new realities of Irish politics which is that the political landscape is quite fractured, and certainly Fine Gael will try to be be constructive in terms of how we move forward.”

On Monday the party held their first in a series of meetings to rally support for Sinn Fein’s efforts to get into government.

Over the next fortnight, further meetings are planned for Dublin, Galway, Cavan and Newry.

“I am very conscience that election day came and went but the issues didn’t come and go,” she said.

“We still have a housing crisis, we still have huge difficulties in our health services, people are still under real pressure.

“I don’t believe that you have the election and then politicians retreat behind high walls and have a private discussion.

“I think it’s really important that you come out, that you set out your stall for people, that you report on progress and also that you take questions and you answer them and you listen to people’s ideas.

“Faith has been fractured in politics.

Ms McDonald added that Sinn Fein has been elected on a mandate of change.

“People have told me that – people told me they voted for Sinn Fein because they wanted a new government,” she added.