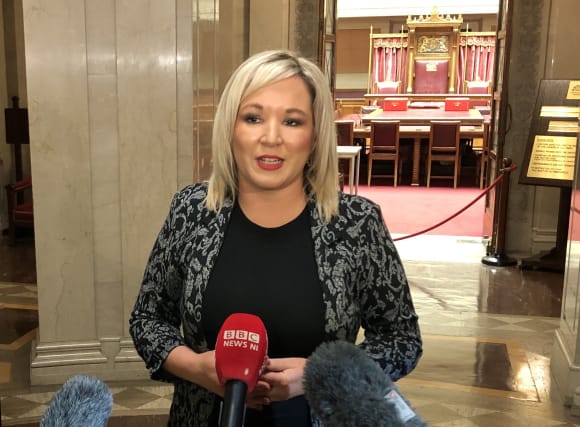 Leo Varadkar and Micheal Martin have “done nothing” to prepare for a referendum on a united Ireland, the deputy leader of Sinn Fein has said.

Speaking at Sinn Fein’s public meeting in Dublin’s Liberty Hall on Tuesday night, Michelle O’Neill said planning for a poll on a united Ireland must begin and she expects one will be held within the next five years.

More than 800 people attended the party’s first public meeting in Co Cork on Monday night aimed at drumming up support for them to be in government.

Ms O’Neill said: “Change is coming. It is an inevitable position that we are all in.

“I have no doubt in my mind that in the immediate future we will be voting in a border poll.

“Our party position is that there should be a unity referendum in the next five years as that gives us time to plan. There has to be preparation and we have to give people information.

“The new Ireland we want to live in is not just for republicans or nationalists – it has to be for every single person who shares this island.

“There is nothing to fear from it, it is actually something better.”

Ms O’Neill accused the leaders of Fianna Fail and Fine Gael – Mr Martin and Mr Varadkar – of doing nothing to prepare for a united Ireland.

She said: “Leo and Micheal purport to be united Irelanders. Well, they have done nothing about it. Not one thing about it. So that is why it is time to plan for the future and change.”

The deputy leader of Sinn Fein said she takes threats by the Provisional IRA against her seriously but she will “keep doing what she is doing”.

Ms O’Neill said earlier this month that the PSNI has informed her that dissident republicans are planning an attack against her and Gerry Kelly.

Speaking at Sinn Fein’s public meeting in Dublin on Tuesday, she said: “Of course I take these threats seriously. That’s a threat against me and my family, so of course you’re going to be very worried about those things.

“We’re human… and I would say this. We will be returning to work because we have a job to do and have to make things better for people and we will keep doing what we are doing.”

Sinn Fein leader Mary Lou McDonald said the party will not be taking part in demonstrations or protests against Fianna Fail and Fine Gael.

People Before Profit are holding a demonstration on March 7 calling for a change to Ireland’s government.

Posters for the event which were distributed outside the meeting describe it as a march against Fianna Fail and Fine Gael returning to government.

When asked by a member of People Before Profit in the audience if she would take part in the demonstration, Ms McDonald said: “You don’t need our permission to go and organise and protest.

“I would say this to you – the focus of our work is on negotiations with other parties and of course talking to all of you and engaging with you.

She criticised the leaders of Fine Gael and Fianna Fail for refusing to meet them for government formation talks.

She said: “I have a message for the leaders of those parties who have decided not to speak to us. I say this: we respect your mandate and now it is time that you respect ours.

“I think it is very clear that we will talk to everybody because that is what adults do. I say to them, listen to the voices of the electorate and understand this – the vote for change was a vote to get Fianna Fail and Fine Gael out of government and not to put them back in.”

Ms McDonald said the public meetings and conversations with the public will continue, adding: “Sinn Fein wants real change and I know all of you here want real change.

“For the first time ever, Fianna Fail and Fine Gael did not win a majority of votes… that represents a seismic change.

“They are trying everything to keep Sinn Fein and everyone who voted for them out of power. That is a very deliberate tactic.

“This is not a one-off event – the conversation will continue. I hope Leo Varadkar and the lads get over their fear of public meetings. I read somewhere that it was said that Sinn Fein are the barbarians at the gate. Well newsflash, the barbarians are through the gate.”