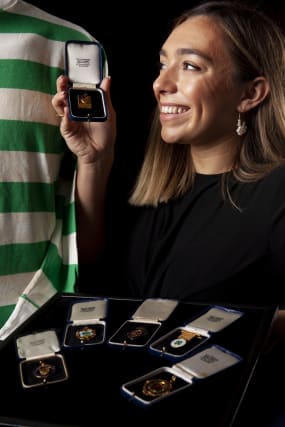 The family of one of the Lisbon Lions is to auction off his archive of historic sporting items – including his 1967 European Cup winner’s medal.

Other items in the auction include the match-worn jersey of Inter Milan midfielder Gianfranco Bedin from the European Cup final, which Chalmers swapped at the end of the match.

Another shirt going under the hammer is one worn by Pele, who Chalmers swapped with after Scotland’s 1-1 draw with Brazil at Hampden Park in 1966.

Chalmers’ son Paul said it was a family decision to allow the collection to be sold with the blessing of his mother Sadie.

He said: “I was too young to go to Lisbon but I remember the house being really crowded as we all gathered to watch the game.

“It was a tight match and when dad scored the winner the house erupted.

“The team were all good friends and the Lions remained very close after they all retired.”

He added: “The Brazil game was a real highlight for my dad. He was surprised but very proud when Pele came over to swap jerseys at the end of the 1-1 draw at Hampden.

“From 2016 to his passing in 2019 was a very difficult time for the family and the experience put a lot of things into perspective.

“Dad’s medals and other memorabilia are with his six children and their families, and with mum’s blessing we all decided that the time was right to let another football fan become custodian of the archive.

“We will still have a million memories to share and that is what’s important.”

The Sporting Medals and Trophies Auction will take place at McTear’s Auctioneers on Friday March 13 at 2pm.

Also featuring in the auction along with Chalmers shirts, boots and various match programmes are Jimmy Johnstone’s “J777 NKY” car registration plate and a Llardo porcelain model of the Fifa World Cup trophy.

Brian Clements, managing director at McTear’s, said: “This is an incredibly important archive that tells a fascinating story of one of Scotland’s most famous footballers.

“Stevie Chalmers was a huge figure in the game and gained immortality with Celtic fans when he scored the winning goal in the 1967 European Cup final.

“It is extremely rare to find anything associated with the 1967 final appear at auction, but to see the match winner’s medal is quite remarkable.

“This is one of, if not the, most important pieces of Celtic memorabilia ever to come to auction and we expect there will be considerable interest from football fans and sports historians across the globe.”