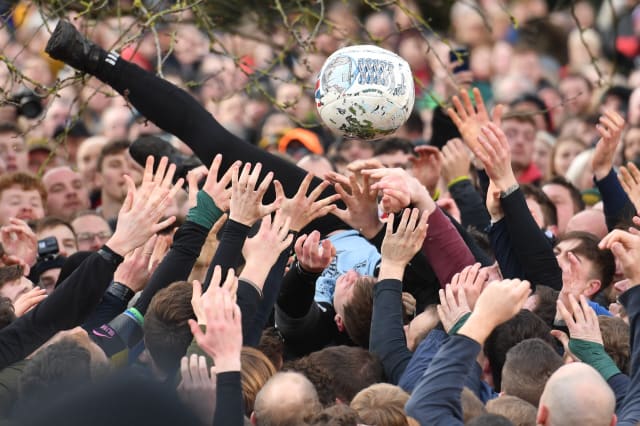 The tradition sees two teams battle to get the ball to goals that are three miles apart in a relatively lawless rugby-football hybrid that dates back centuries.

There are records of a similar game being played around this time of year across the UK as far back as the 12th century, but the Ashbourne game is suspected to have been played since 1667.

After beginning at 2pm on Tuesday, the match will not finish until Wednesday – with a break after sunset on Tuesday evening to drink, eat and sleep.

Teams are picked based upon where they are from in the town, although there are no limits to the teams’ sizes and visitors to the area make up the numbers too.

You are an Up’Ard if you are from north of Henmore Brook, or one of the Down’Ards if you were born south of it.

The goals, which players must hit three times to score, used to be mills either side of the town that have since been demolished.

The ball can be kicked, but it rarely is.

Usually it is carried or thrown between dozens of people trying to get a goal.

Potential scorers have to jump in to hit the ball on their respective scoring post three times to score.

In the 1990s, purpose-built goals using some of the original millstones were erected in Henmore Brook.

Such is the physical and frenetic nature of the game, shops board up their windows in preparation beforehand.

It gained its royal title in 1928 after Edward VIII, who was then Prince of Wales, opened the game.

In 2003, the current Prince of Wales was given the honour of “turning up” the ball to commence the match – joining other famous names, including the late legendary football manager Brian Clough.