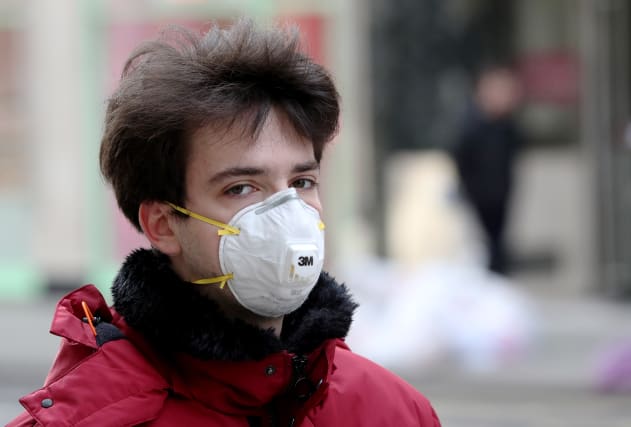 Global markets extended a nightmare run on Tuesday as coronavirus fears continued to grip investors across the world.

It comes after the FTSE 100 racked up its worst day since 2015 on Monday, as Italy became the first country in Europe to announce a major outbreak of coronavirus.

“Health fears continue to hurt market sentiment as the major equity markets in Europe are all in the red,” said David Madden, a market analyst at CMC Markets.

Britain’s blue chip index was not the only loser on Tuesday.

Germany’s Dax index fell 1.9%, while the Paris-based index Cac lost 2% of its value. Italy’s MIB index, which collapsed on Monday with a 5.4% drop, fared better, down only 1.4%.

Markets had opened on a positive note on Tuesday morning, gaining a few points, but the optimism did not last long and the markets soon turned back into the red.

When the US markets opened, they repeated the same pattern, opening up around 0.3% before dropping back into negative territory.

“The colossal losses that were racked up yesterday encouraged some bargain hunting at the start of today’s session, but then old concerns crept in, hence why we are offside again,” Mr Madden said.

Even gold, which is normally a safe haven in troubled times and made major gains on Monday, was down by 0.9% to 1,643.54 US dollars per ounce on Tuesday afternoon after UK markets had closed.

International oil standard Brent crude extended another day of losses as traders worried that a potential global slowdown would impact demand. It was down 1.1% to 55.56 dollars per barrel.

In company news, Tesco shares fell 2.5%, or 6.3p, to 243p as the company released two pieces of big news. First it said the business had sold its 20% stake in a Chinese joint venture, but it later announced plans to slash more than 1,800 jobs as part of changes to bakeries in its large supermarkets.

Tesco said it will convert 58 bakeries to be able to finish off pre-baked products in-store, and 201 sites will only bake some of its most popular items from scratch.

HSBC had similar news, but on a smaller scale, saying 46 jobs were at risk as 27 branches across the country were set to close. Only staff from 10 branches face losing their jobs – the others will be moved to nearby HSBC sites. Its shares were down 2%, or 11.1p, to 539.7p.

Aerospace engineering group Meggitt fell 30.6p to 563.8p as it warned over a sales hit from the grounding of Boeing’s 737 Max planes and the impact of the coronavirus outbreak.

Hotel Chocolat was one of the new companies on the London exchanges in positive territory as it posted higher half-year sales, boosted by new stores in the UK and internationally.

The upmarket retailer saw shares jump higher in early trading after it posted a 14% increase in revenue to £91.7 million for the 26 weeks to December 29.

Teenage girl and man die in separate incidents in Cornwall

Dominic Cummings: I don’t regret what I did