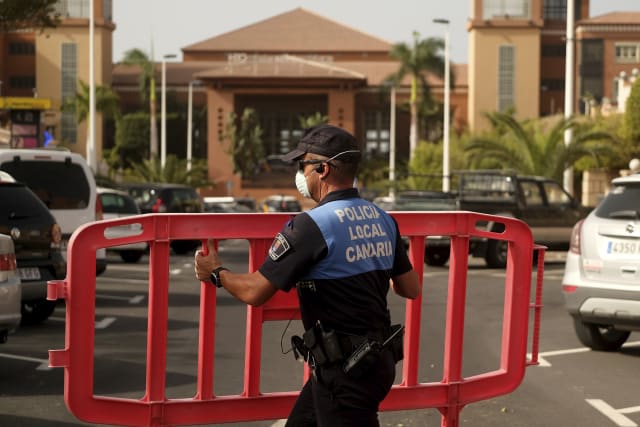 A British holidaymaker told to stay inside a Tenerife hotel has said she is having a “holiday from hell” after a man there was diagnosed with coronavirus.

Guests at the four-star H10 Costa Adeje Palace in the south west of the island have been sent a letter saying the hotel is “closed down” and they must remain in their rooms until further notice.

Travel firms Tui and Jet2holidays are among those who use use the hotel for package holidays, with Tui having around 200 guests there from different countries, including a small number from the UK.

Hannah Green, 27, from Hertfordshire, arrived at the hotel on Saturday with her boyfriend, Court Amys, and their one-year-old son. They are supposed to be staying until Sunday.

She told the PA news agency that communication had been “non-existent”, adding: “We woke up to a note under our door this morning saying that for health reasons not to leave our room.

“I called downstairs to reception as soon as I saw it and they wouldn’t tell us anything. So I quickly got on my phone and googled and saw a man had tested positive for coronavirus so I basically assumed it was that.

“But since then, we’ve had nothing from the hotel – no one has told us anything or what’s going to happen.”

Ms Green said she booked her holiday with Tui, adding: “I’ve called them as well and they haven’t really said much either. They were just going on what the hotel’s been telling them, basically, and the hotel wouldn’t tell them anything either.

“People are moving around the hotel but we’re not. We’re in our room with the baby. We’re worried for the baby.”

Ms Green said she would like to go home but added: “I don’t think we’ll be allowed to leave. We don’t want to be here. We’re fed up now.”

She said a sandstorm at the weekend had also confined them to their rooms.

“The sandstorm was the day after we arrived, Sunday, so we had to stay in the hotel then,” she said. “Holiday from hell, honestly.”

She said the couple were amusing themselves by watching TV and films on their laptop.

The H10 Costa Adeje Palace is a seafront hotel with nearly 500 rooms, four pools and a gym.

Another couple, David Hoon, 60, and Pamela Scott, 63, from Matlock, Derbyshire, who also travelled with Tui, told the MailOnline they were surviving on meagre snacks.

Mr Hoon said: “Nobody is telling us what’s going on, how long this is going to last and who is going to feed us. The way this has been handled is a disgrace.

“The hotel is like a ghost house and my fear is that by trapping us inside it, we stand more chance of catching the coronavirus. This whole thing is very worrying.”

Fellow British tourist Christopher Betts said guests had been allowed to have breakfast in the hotel restaurant on Tuesday morning but were otherwise told to stay in their rooms.

A spokeswoman for Tui UK said it was aware of a case of Covid-19 at the hotel.

She added: “We can confirm that Tui has around 200 customers in the resort from different countries. Tui representatives on Tenerife are present on site and will liaise with our customers.

“All guests have been asked to remain in their rooms and are being looked after by the hotel.

“Our holiday programme to Tenerife continues to operate as planned for all other hotels.”

A spokesman for Jet2 said: “We are aware of reports that a non-Jet2holidays customer staying at the H10 Costa Adeje Palace in Tenerife has tested positive for coronavirus.

“Under the advice of the regional and the Spanish government authorities, the hotel has been placed under quarantine.”

A statement from the hotel said it has “implemented all health and operational recommendations from the health authorities to ensure the safety and wellbeing of customers and employees”.

“Additionally, we are providing customers and hotel staff all the necessary care and attention so that, despite the inconveniences this situation may cause, they are taken care of in the best way possible.”

It comes as travellers returning to the UK from northern Italy were told they may need to self-isolate as part of measures to stop the spread of the Covid-19 disease caused by coronavirus.

Symptoms of Covid-19 include a cough, fever and shortness of breath.

Health Secretary Matt Hancock said official advice has been changed to say that those who have been to anywhere in Italy north of Pisa should self-isolate if they develop flu-like symptoms on their return to the UK.

Britons who have been in locked down regions of Italy – including Lombardy and Veneto – should self-isolate at home for 14 days even if they have no symptoms.

The advice comes as the Department of Health added Iran, Vietnam, Cambodia, Laos, Burma and parts of northern Italy to the list of places where travellers need to follow clinical advice.

In Italy, 229 people have tested positive for coronavirus and seven have died.

Schools have been closed in affected areas, theatre performances cancelled, and Venice Carnival celebrations were called off, while producers said filming on the latest Mission: Impossible movie starring Tom Cruise has been halted.

Mr Hancock told the BBC the Government was not aware of any Britons who were in the quarantined areas of northern Italy, but urged anyone there to make contact with the embassy in Rome.

He added that the UK has done a “huge amount” of work preparing in case coronavirus becomes a pandemic, including setting up testing facilities outside A&Es and preparing home testing kits.

He said: “Once it gets to that point, there isn’t a way to stop it coming into the UK in a big way.

“It is not yet clear that it will become a pandemic – the number of cases in China has been slowing over the last couple of weeks and we are relatively confident that information is correct.”

He said there is “the possibility this is a relatively small outbreak in the UK”, adding there are just 13 cases in the country so far.

Scotland’s chief medical officer Catherine Calderwood said people could be banned from gathering in large numbers to contain the virus if it spreads.

China has reported 77,658 cases and 2,663 deaths, while South Korea has the second highest number of cases with 893 and eight deaths.