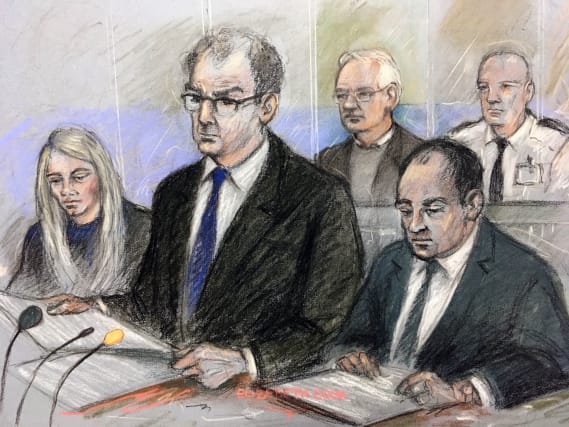 WikiLeaks founder Julian Assange’s extradition to the US is based on “lies, lies and more lies,” his lawyers have told a court.

Assange, 48, is wanted to face trial in the US on 18 charges over the leaking of hundreds of thousands of classified documents in 2010 and 2011.

He is accused of conspiring to steal from and hack into department of defence computers, along with former US army intelligence analyst Chelsea Manning.

Prosecutors claim he knowingly put hundreds of sources around the world at risk of torture and death by publishing unredacted documents containing names or other identifying details.

But Chris Summers QC, representing Assange, argued on Tuesday that the extradition request “boldly and brazenly” misrepresents the facts.

“You can accurately describe this chapter of the case as lies, lies and more lies,” he told Woolwich Crown Court, which is sitting as a magistrates’ court.

Mr Summers said WikiLeaks had begun redacting a tranche of 250,000 leaked cables in November 2010, working with media partners around the world.

“That process involved the US government and state department feeding suggested redactions to the media,” he said.

“Knowing the US government was involved in the redaction process, can it be in any way said the request represents a fair or accurate representation of what occurred?”

Mr Summers blamed the publication of the unredacted database of documents on a 2011 book from the Guardian newspaper about WikiLeaks, which contained a 58-key password.

He said: “Far from being a reckless, unredacted release, the world knows, every reporter in this room knows, the US government knows, that what actually occurred was that one of the media partners published a book in February 2011 and published the password to the unredacted materials, which then enabled the entire world to publish those unredacted materials in a book and they circulated on the internet, not on the WikiLeaks site, but on other sites.

“None of them have been prosecuted, some of which are US-based, all of them published first, some of them are still there.”

Mr Summers said it was not until months later that it was discovered the password could be used along with a mirrored site to access the unredacted database – which was revealed by German news outlet Der Freitag on August 25 2011.

The court heard, in a phone call to the White House on the same day, Assange had warned: “I don’t understand why you’re not seeing the urgency of this. Unless you do something, then people’s lives are put at risk.”

Assange is also accused of encouraging Manning to steal classified documents, which allegedly included a bid to crack a password “hash” (a scrambled password) on US department of defence computers to anonymously access a classified network called the Secret Internet Protocol Network.

But his lawyers point to evidence given by Manning at her own 2013 court martial, which they say refutes these claims.

Assange’s barrister Edward Fitzgerald QC complained of his client’s treatment inside high-security Belmarsh prison at the start of the second day of the hearing on Tuesday, as supporters’ chants could again be heard outside the building.

Mr Fitzgerald said papers handed to Assange in court had been taken off him at Belmarsh, which is next door to the court, arguing his treatment “could be a contempt of this court”.

But District Judge Vanessa Baraitser said she has no powers to issue directions to the Prison Service and could only act if there is evidence Assange is unable to participate in the case.

“If it comes to that please let me know. Unless and until it does, unless you are asking this court to make a finding of contempt, I’m afraid my powers are very limited in this respect,” she said.

Assange has been held on remand in Belmarsh prison since last September after serving a 50-week jail sentence for breaching his bail conditions while he was in the Ecuadorian embassy in London. He entered the building in 2012 to avoid extradition to Sweden over sex offence allegations, which he has always denied and were subsequently dropped.