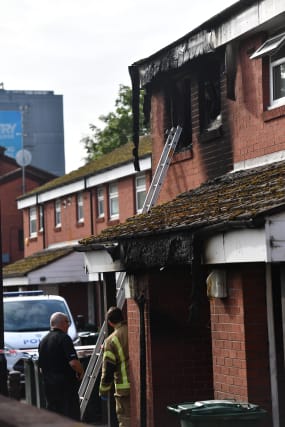 A man “obsessed” with setting fires has admitted manslaughter after starting a blaze that killed a pensioner.

Malcolm Turner, 69, was pronounced dead at the scene after being found collapsed at his maisonette home in Jenner Street, Coventry, at about 4.25am on August 20, last year.

Newing, of no fixed address, used a lighter to set fire to Mr Turner’s mobility scooter, parked outside the only entrance to the victim’s home – trapping him inside.

Mr Turner then succumbed to the smoke despite the best efforts of firefighters and paramedics.

Having set the deadly fire, Newing was then captured on CCTV lighting a mattress outside another home in nearby Foleshill Road.

The flames spread to the house, gutting the property, although the occupants were able to escape out of the back.

Using CCTV, detectives identified Newing and tracked his movements on the night, arresting him two days later in Coventry city centre, when he was spotted by officers.

The force said his motive was still unclear, although he admitted knowing Mr Turner and drinking at the same pub as the pensioner before the attack.

When detained, 43-year-old Newing was wearing the same clothes he had been on the night he set the fires – and was still carrying the lighter used.

In a victim impact statement read in court, the victim’s sister said the family’s lives had been “changed forever” because of Newing.

She added: “We had the privilege of him being a much-loved son, brother, uncle, husband and father before he was so senselessly and cruelly taken from us and there will always be an emptiness inside of us due to his death at the hands of you, Richard Newing.

“We, as a family, truly hope that each day you are locked up, you think of our brother and what you did, and that you see our brother’s face each time you light a match or see a flame and realise the pain and heartbreak that you have caused us.

“We can at least have the knowledge that whilst you are locked away, and I hope that is for a very long time, that you cannot put any other family through what you have put us through, and that this haunts until the end of your days.”

He added: “I hope this case outlines the seriousness of starting fires and how quickly they can spread and devastate lives.”