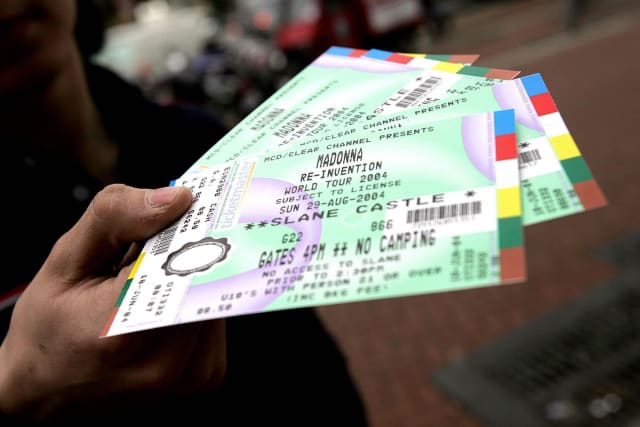 Two internet touts who re-sold tickets worth millions of pounds to high profile events like Ed Sheeran and Adele concerts have been jailed.

Peter Hunter and David Smith – who traded as Ticket Wiz and BZZ – were found guilty of fraudulent trading following a landmark trial which ended earlier this month.

Sheeran's manager Stuart Camp gave evidence in the pair's long-running trial, telling jurors they had decided to take a stand against touts after spotting £75 seats at a Sheeran charity gig on sale for £7,000.

Hunter, 51, and Smith, 66, of Crossfield Road, north London, were found guilty of three counts of fraudulent trading and one of possessing articles for fraud.

After they were convicted, a National Trading Standards (NTS) spokesman said it was "a landmark case" which marks "the first successful prosecution against a company fraudulently reselling tickets on a large scale".

The court heard how the pair sold the tickets on secondary ticketing sites, including the "big four" – Viagogo, GetMein, StubHub and Seatwave – at inflated prices.

But Hunter and Smith's defence teams told the jury that they were a trusted and reliable source of tickets.

The charges they faced related to a range of practices including falsely representing their identities when buying tickets and failing to inform consumers buying tickets that they were at risk of being refused entry.

Hunter, who is originally from Dublin, told the jury how he started his business when a friend without a credit card asked him to buy tickets for a Madonna concert for her and he realised he could re-sell extra purchases at a huge profit.

Sentencing the pair, Judge Mushtaq Khokhar said: "This was a case of sustained dishonesty for a number of years."

But he told Hunter: "You are not somebody who deliberately went out of their way rip off the consumer. But I'm afraid this is a serious matter. A lot of people in this case paid a lot more than they could have paid."

And Judge Khokhar said: "It gives me no pleasure to impose the sentences I'm about to impose but I have to consider my public duty."

The judge also praised Smith, who is a former news editor of Gay Times, for his work for LGBT rights, saying he should be "justifiably proud".

The case has provoked calls for a wider criminal investigation of the secondary ticketing market.

Adam Webb, campaign manager, FanFair Alliance – which is supported by managers of artists including Arctic Monkeys, Mumford & Sons, Ed Sheeran and Little Mix – said: "It's a fantastic result for National Trading Standards and for music lovers across the UK, and should also send shockwaves through the likes of Viagogo and StubHub whose businesses are dependent upon large-scale resellers.

"By facilitating the activities of online touts, there must be concerns that the platforms themselves are profiting from the sale of tickets unlawfully acquired by their biggest suppliers.

"This should be investigated as a matter of urgency, and lead to action against those platforms if they have benefited from the proceeds of criminality."