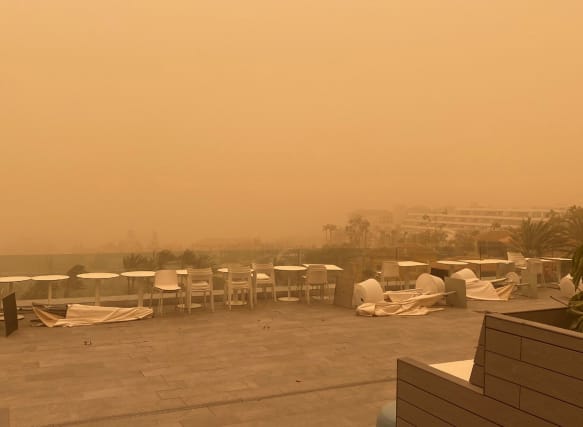 Thousands of UK holidaymakers attempting to return from the Canary Islands suffered a third day of flight disruption due to a Saharan sandstorm.

The Spanish archipelago’s airports reopened on Monday after being closed during the weekend, but many flights were cancelled and delayed.

Leigh Lucas, 44, from east London, is on a Tui package holiday on Lanzarote with her husband and three children.

She told the PA news agency: “We’re having a bit of a nightmare to be honest. Tui are really not looking after us very well.

“When all this hit we thought ‘we’ll be fine, we’re with a reputable company’. But we’re having an absolute nightmare, they’re really making the whole ordeal worse.”

Ms Lucas said her family were told to check out of their hotel and board a coach to the airport on Sunday, despite their flight being cancelled.

Six and a half hours later, at 1am on Monday, they were taken back to their original hotel.

Tui expects that the majority of its customers due to return home will be able to board flights on Monday.

A spokeswoman for the firm said: “We would like to sincerely apologise to our customers whose flights were disrupted by adverse and changeable weather conditions in the Canary Islands over the weekend.

“The safety of our customers and crew is always our highest priority and we’re working tirelessly to get everyone to their destination as quickly as possible.

“Following an improvement in the weather overnight, all flights scheduled to depart to the Canary Islands today will be operating as planned.”

A spokesman for Jet2.com said: “Like all airlines operating to the Canary Islands, the adverse and changeable conditions affecting the whole area since the weekend have resulted in flights experiencing delays or having to be diverted to other airports.

“We would like to apologise to all affected customers for any inconvenience caused by these extraordinary circumstances, which are completely beyond our control.

“Our teams are working tirelessly to look after customers and to get everyone to their intended destination as soon as possible.”