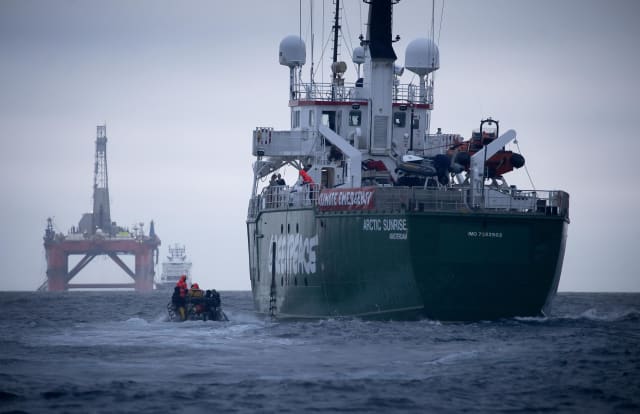 A judge will decide next month whether to punish an executive director of Greenpeace for his hand in a protest on board an oil rig last year.

John Sauven faces up to two years in prison while the environmental organisation could be handed a huge fine by Judge Lady Wolffe if found to be in contempt of court.

The BP rig was bound for the Vorlich oil field in the North Sea before being occupied by activists in the Cromarty Firth, north of Inverness, on June 9.

Greenpeace ship Arctic Sunrise shadowed the rig and prevented it from reaching the oil field for 12 days.

Transocean, the operators, secured an interim interdict, with BP’s permission, which Greenpeace is accused of breaching by continuing its protest.

At the Court of Session on Monday, Jonathan Barne QC, for Transocean, labelled the action as “inherently dangerous” with protesters “not familiar with layout or activity of the rig”.

He added the “prosecution took the view there was no actual evidence of danger … but the potential for it”.

A total of 14 arrests were made at the time.

Lady Wolffe asked James Mure QC, for Greenpeace, about Mr Sauven’s involvement in the process of organising the protest.

When touching upon who chartered Arctic Sunrise, Mr Mure replied it was Greenpeace International – “a separate legal entity” – and Mr Sauven had been offered devolvement of the vessel, which flies under a Dutch flag.

In response to a question of financial remuneration, he added: “Each national entity around the world makes payments to Greenpeace International each year.

“Greenpeace International decides how the money should be used and is the operator of the vessel not the owner.”

As the Arctic Sunrise did not arrive until around June 16, at least two smaller boats were involved and driven up from London, towed by vans a day or so before the protest began.

Lady Wolffe asked if Mr Sauven specifically authorised this or if Rachel Murray – logistics director at Greenpeace – was aware of the campaign.

Mr Mure said she was aware, to which Lady Wolffe replied: “Was she part of the senior management team who authorised it?”

He said: “Mr Sauven authorised it.”

Asked if the executive did so in consultation, Mr Mure said a discussion about logistics was had afterwards.

The court also heard Mr Sauvin was in contact with the captain of the Arctic Sunrise on a “daily” basis, with both initiating contact and this sometimes taking place more than once a day.

Mr Mure also confirmed there were “no attempts to board a moving rig” and only when it was stationary in Cromarty harbour.

Mr Barne later said while the Cromarty Firth is a public place, the local port authority was not and “at the time there was a restriction on the ability to approach the rig” there.

After Mr Mure’s final submissions Mr Barne also accused the group of “using court procedure when it suits them”.

He added the “wider public will be interested to see how court responds to this situation” in light of the COP26 conference scheduled to be held in Glasgow this November.

The case before Lady Wolffe continues on March 23.