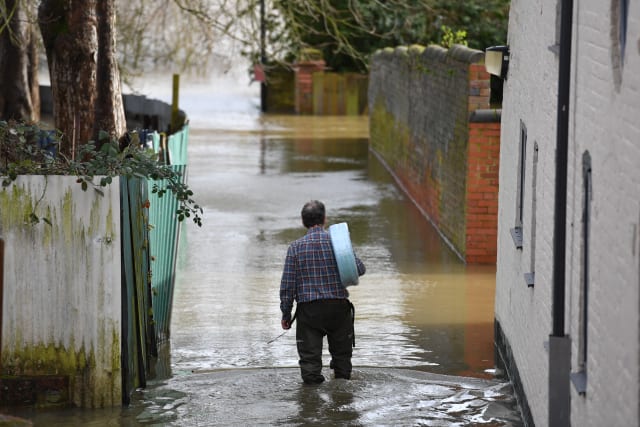 Serious flooding from swollen rivers will threaten parts of England for several days, the Environment Agency has warned.

Rainfall is expected to continue hitting areas along the Rivers Severn, Wye, Ouse and Trent, while two severe danger-to-life flood warnings were issued for Ironbridge and Shrewsbury in Shropshire, both along the Severn.

Some 105 warnings, meaning that flooding is expected, and 207 alerts meaning flooding is possible, were also in force across England after a third weekend of downpours that started with Storm Ciara and continued with Storm Dennis.

The torrents are contributing to record-high river levels and England has endured more than 141% of its average February rainfall so far, said the EA.

It warned the country needs to brace itself for “more frequent periods of extreme weather like this” because of climate change.

The Met Office has forecast a week of widespread showery weather, while a warning for ice covering Scotland, Northern Ireland and much of northern England, remains in force until 10am on Tuesday.

Meanwhile, Downing Street defended Prime Minister Boris Johnson’s continued absence from flooded areas, with officials insisting it was important not to “distract” from the ongoing effort to deal with the problem.

The Prime Minister had been receiving “regular updates” about the situation while Environment Secretary George Eustice is “rightly” leading the Government’s response, said Number 10.

More than 600 households and a similar number of businesses have been hit in Wales, representing almost 25% of all the properties affected across the UK.

Caroline Douglass, director of incident management at the EA, said: “Flooding has a long-lasting and devastating impact on people’s lives.

“River levels remain high and communities along the river Severn, in particular Shrewsbury, Bewdley and Ironbridge, should be ready for potential flooding.

“Groundwater levels across parts of Dorset, Wiltshire, Hampshire and Sussex are continuing to rise and will lead to more flooding impacts later in the week.

“We have seen our third weekend of exceptional river levels and stormy weather; with the effects of climate change, we need to prepare for more frequent periods of extreme weather like this.

“People need to be aware of their flood risk, sign up to flood warnings, make a flood plan and not to drive or walk through flood water.”

The EA said 1,000 staff per day have worked to operate flood defences and pumps, clear debris and repair damaged defences since Storm Dennis swept into the UK.

Some 3.7 miles of temporary flood barriers have been erected and flood defences have protected more than 25,000 properties, the EA said.