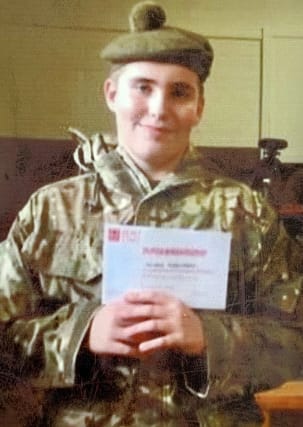 Keiran Esquierdo was playing with friends when the 10-metre telegraph pole he was standing on became dislodged and rolled down a grass embankment on October 15 2017.

He also fell down the embankment and was pinned between the heavy pole and a concrete fence post at the bottom of the slope near the Mill Hill Medical Centre in Kelloholm, Dumfries and Galloway.

His friends ran to get help and fire crews used specialist equipment to lift the pole, but Keiran could not be saved and was pronounced dead at the scene, with a post-mortem examination later confirming asphyxia as the cause of death.

During investigations into the incident, officials found the poles should not have been there but had been delivered to the wrong location.

Keiran’s family paid tribute to him in a statement released through Digby Brown Solicitors and said they hope lessons can be learned from the tragedy.

They said: “Every day we feel Keiran’s absence and our lives will never be the same.

“He was a beautiful, fun and popular boy, and we will continue to remember him, his laugh and the good times.

“For the last two years we’ve waited for answers and justice as we couldn’t heal and start to think of the future without a conclusion to the past.

“Now that it’s resolved we hope companies learn from our loss so other families – and also their employees – are spared the pain of having to cope with a death like this.

“We’d finally like to thank our friends, family and our community who have been there for us through thick and thin for the last two years – your support means more than we could describe.”

Keiran was a pupil at Sanquhar Academy and was also a member of his local army cadets.

Damian White, partner at Digby Brown’s Ayr office, said: “What makes Keiran’s passing all the more tragic is just how avoidable it was and I commend his family for the strength, unity and composure they’ve shown through the criminal process.

“Safe practices in any workplace setting are not designed to impede duties – they are designed to minimise risk, avoid accidents, in particular fatal accidents, and the needless loss of life.

“I know it’s of little comfort to Keiran’s loved ones but at the very least I hope today’s outcome leads to improved workplace and public safety so repeat incidents do not occur.”

A SPIE spokeswoman said: “Firstly, as was stated in the court hearing, SPIE’s thoughts and sincere condolences go out to all the family and Kelloholm community at this difficult time.”

She added: “SPIE provided full co-operation to the HSE throughout the investigation. SPIE also undertook a detailed investigation of its own.

“SPIE’s safety policies are a top priority and ensuring the safety of the public, employees, customers and suppliers is of prime importance at all times.

“New processes were immediately put in place to ensure such an incident could not happen again.”