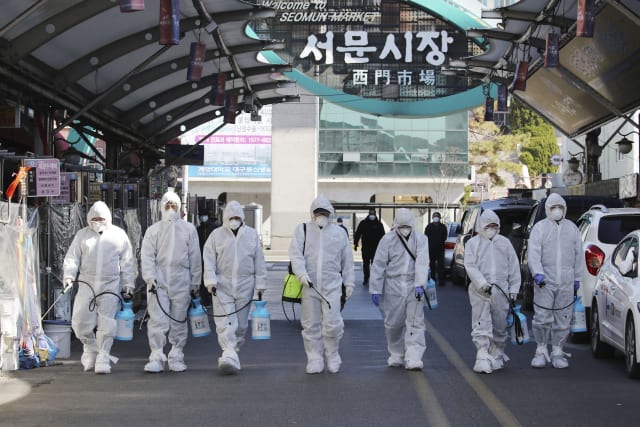 Fears are growing that the spread of coronavirus could become a pandemic as new cases are reported globally.

– How close are we to a pandemic?

The World Health Organisation (WHO) declares a pandemic when a new disease spreads to several countries and shows a sustained transmission between humans.

This is increasingly the case with coronavirus, leading experts to predict that it is only a matter of time before WHO declares a pandemic.

There have been 13 confirmed cases in the UK so far, all linked to known cases from Asia.

Experts are worried, however, about the emergence of Covid-19 disease in people with no clear contact with anyone from affected Asian countries, suggesting it is being passed on by people with no symptoms.

At the moment, Public Health England (PHE) and the Department of Health are confident about containing an outbreak here, though the head of the NHS, Sir Simon Stevens, has warned it is likely more people will have to stay at home in the future.

– Should we be worried about Italy?

Yes. Cases in Italy have doubled within a few days and the country now has the largest number of cases in Europe, at more than 160.

In the regions of Lombardy and Veneto, a lock-down is in place in several towns, affecting about 50,000 people.

There is concern that unless the outbreak of the virus is contained within Italy, there could be more rapid spread in other European countries.

– What about the rest of the world?

About 77,000 people in China, where the virus emerged in the city of Wuhan, have been infected and nearly 2,600 have died.

More than 1,200 cases have been confirmed in 26 other countries globally, and there have been more than 20 deaths.

Yes, including the elderly and those with long-term conditions. Experts are becoming increasingly concerned that the virus is being spread by asymptomatic people, and that the incubation period for the virus may in fact be longer than 14 days.

Dr Simon Clarke, associate professor in cellular microbiology at the University of Reading, has said: “While it remains the case that most people who become infected will have light symptoms or none at all, such uncontrollable spread would present a serious risk to vulnerable individuals.”

While the WHO has been advising countries to work on containing the virus, the next step would be to mitigate the impact of continued transmission.

Measures could include social distancing, such as closing schools, nurseries, sporting events and workplaces, and asking people to stay home and avoid public transport.

Health systems would also need to ramp up their plans, such as preparing for the impact more people with Covid-19 would have on intensive care services.