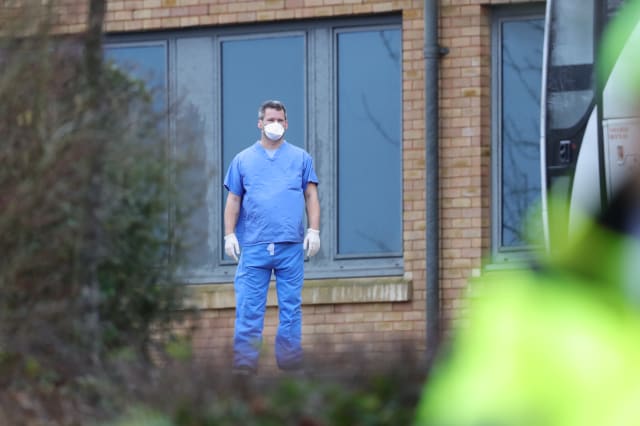 The UK remains “prepared for all eventualities”, Downing Street has insisted, as fears over a global coronavirus pandemic continue to grow.

Experts have raised concern that coronavirus will reach pandemic status following a rapid spread of infection in countries including Italy, South Korea and Iran.

The World Health Organisation (WHO) is worried about the lack of an obvious link between China and newer cases in these countries, and some scientists argue the virus can be passed on easily and by those with no symptoms.

In Italy, around 50,000 people are affected by a lockdown in the regions of Lombardy and Veneto, as the country reports more than 160 cases – the largest number in Europe.

In the UK, 13 people have so far been diagnosed with Covid-19 illness caused by the virus, including four over the weekend who had been on the Diamond Princess cruise ship that was held in quarantine in Japan.

On Monday, Downing Street insisted the UK was “well prepared” and said the risk to individuals in the UK remains low.

Asked whether the UK could put in place restrictive measures such as those seen in Italy to combat the spread of the disease, the Prime Minister’s official spokesman said: “We will be led by the advice from public health and medical experts and will take steps which they feel are required to best protect the British public.

“We are well prepared for UK cases, we are using tried and tested procedures to prevent further spread and the NHS is extremely well prepared and used to managing infections.

“We continue to work closely with the World Health Organisation and international partners as the situation develops and we remain prepared for all eventualities.”

WHO spokeswoman Margaret Harris told the PA news agency the organisation will not officially declare a pandemic, but will start to use the term in communications if it reaches that stage.

She added: “We could start describing it as a pandemic but at the moment we are saying it is clusters and outbreaks in some countries.”

Ms Harris said in most cases there was a clear epidemiological link between those affected and cases reported in Asia.

“If it became clear that it is all around the globe and we are seeing systematic community transmission, then we would say this meets the definition of a pandemic,” she added.

The Foreign Office has not advised Britons against travel to Italy, but has updated its website with factual information about the situation there.

There are no figures as yet as to whether any Britons are affected by the lockdown and are stuck in Italy.

People in the affected areas are being told to follow public health advice from local Italian authorities.

Meanwhile, British experts have been debating whether the world is heading for a pandemic.

David Heymann, professor of infectious disease epidemiology at the London School of Hygiene and Tropical Medicine, said the term was “distracting”.

He said: “It is still a series of outbreaks, and countries where they are occurring should make every effort to stop transmission and all countries should prepare for more widespread occurrence if it happens.

“Transmissibility in the community is not yet fully understood – terms such as pandemic are distracting.

“What is necessary is to understand the current situation in each country.”

“We already have a Covid-19 epidemic in China and, more recently, large outbreaks in South Korea, Iran and Italy.”

He said if the outbreaks could not be brought under control, then a pandemic could be declared.

“The immediate implication is that many different countries around the world may be sources of Covid-19 infections,” he said.

“This makes it much harder for any one country to detect and contain imported cases and trying to do so will place ever greater demands on national health systems.

“This will make large and difficult-to-control outbreaks more likely in the UK and many other countries.”

On Tuesday, Italian media reported the country’s fifth death from coronavirus – an 88-year-old from the Lombardy region.

The four other people who have died of the illness were also elderly and at least three of them had been suffering serious underlying health problems, it was reported.

About 77,000 people in China, where the virus emerged in Wuhan city, have been infected and nearly 2,600 have died.

More than 1,200 cases have been confirmed in 26 other countries and there have been more than 20 deaths.

Meanwhile, four Britons rescued from a coronavirus-hit cruise ship are being treated at specialist centres in the north of England after testing positive for the illness.

The four – the first diagnoses in people brought back to the UK on repatriation flights – had been on the Diamond Princess cruise ship which was stationed off the coast of Japan for more than two weeks.

They were among a group of 30 Britons and two Irish citizens who arrived at a quarantine block at Arrowe Park Hospital in Merseyside on Saturday.

British couple David and Sally Abel, from Northamptonshire, who were on the cruise for their 50th wedding anniversary, are still in a Japanese hospital after being diagnosed with coronavirus and pneumonia.

Also over the weekend, 118 people repatriated from Wuhan were released from a coronavirus quarantine centre in Milton Keynes.