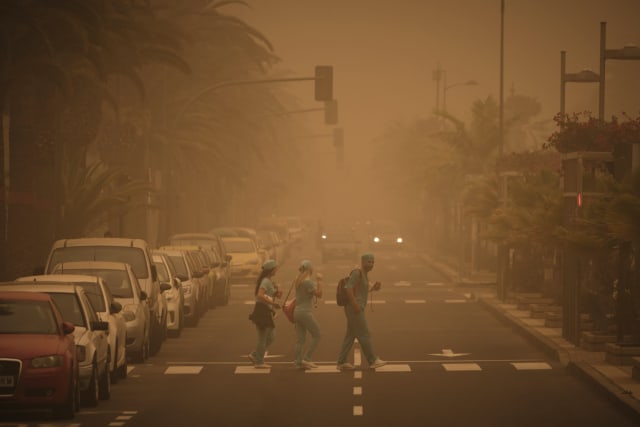 British holidaymakers are stranded at airports in the Canary Islands after a Saharan sandstorm.

Flights from Gran Canaria, Lanzarote, La Palma, North and South Tenerife Airports have been grounded for the foreseeable future due to the weather conditions.

Customer service staff for the airports told the PA news agency that while no planes are flying, airports have remained open for passengers.

One call centre worker said: “People should contact their airline company to try and get accommodation for the night if their flight has been cancelled.”

Passengers have posted photographs of people sitting on the floor waiting for more information.

Greg Horsman, 29, was on holiday with his girlfriend and his friends on a Tui cruise and was due to fly home to Manchester on Saturday evening.

However, they have been forced to stay in Gran Canaria for another two nights due to the storm.

“Last night we were in the airport for five hours and I was frustrated because Tui couldn’t help us or do anything until the airport declared that they were closed which they did at 10.30pm.

“Tui reps did give us updates when we asked but unfortunately it didn’t seem they were getting much information quickly.

“We then spent the night there, most of us in our original cabins, then came back to the airport at 12.30pm and have been here since.

“We are being sent to a hotel tonight but we’re not sure where we’re going to yet.”

He added: “We’re frustrated because there should be contingency plans for when a weather event grounds flights.

“They all kept saying ‘Oh we’ve never seen this happen before’ which I understand, it’s a freak of nature, but when weather grounds all flights there is surely a contingency plan that gets put into place so people can get accommodation sorted.”

Elsewhere, Britons have posted photographs of the orange sky on the islands as the wind continued to batter seaside towns.

Michael Nixon, who is on holiday in Tenerife with his family to celebrate his 50th birthday and is due to fly home to Newcastle on Wednesday, said “pink dust” had covered his rented apartment balcony.

He said: “It’s all a bit surreal. A heavy mist came in last night followed by very strong gusty winds during the night.

“This morning we awoke to yellowish haze and strong winds.

“We ventured out but it’s difficult to see with all of the sand in the air.

“We are slightly concerned that our flight home on Wednesday could be affected.

Meanwhile in the UK, flights out to the Canary Islands are being delayed or cancelled due to the sandstorm.

Tim Crew, 69, had booked a holiday to Lanzarote with his family after cancelling their previous holiday to Hong Kong and Thailand because of the coronavirus outbreak.

Their BA flight out of Gatwick Airport on Sunday has been cancelled and the family has been booked into a hotel.

He said: “It’s one of those things really. If no one had talked to us and if there had been obvious problems and culpability, I’d probably be quite annoyed.

“But everyone’s done the right thing. The pilot came out a few times and told us in person and apologised, saying they had no more news at the moment and they were going to send us to a hotel.

“It’s not great, it’s not how I planned it, it’s not what I want, but these things happen.”