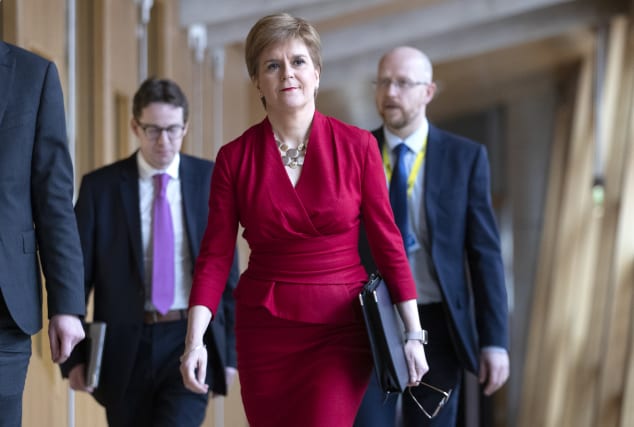 Scotland’s First Minister has confirmed she plans to stay on as SNP leader, as she rubbished the idea of shortcuts to independence.

Responding to rumours about her future, Nicola Sturgeon said she plans to lead her party into next year’s Holyrood election and hopefully beyond.

She also addressed growing calls for a radical approach to achieving Scottish independence, saying testing the ability of the Scottish Parliament to hold a referendum in court was “not her preferred approach”.

Ms Sturgeon told the BBC’s Andrew Marr Show she was “working towards” another independence referendum by the end of this year, a position she has held since before December’s general election.

“But what’s most important of all is that we have a referendum that’s legal, legitimate and can actually deliver independence.”

The First Minister’s request for a Section 30 order, which would provide the necessary devolution of powers to hold another vote, was rejected by Downing Street.

Ms Sturgeon did not rule out the idea of testing the limits of the constitution in court, in a bid to see if the Scottish Parliament could legislate for another poll, however she described it as not being her “preferred option”.

The SNP leader has said she is focused on winning the “political case” for independence, saying that the position of the Prime Minister to withhold powers for the vote was “not sustainable”.

Some in the SNP have offered up other options to increase the pressure on Downing Street, including the holding of a referendum without UK Government permission, described by MP Angus MacNeil as “plan B”.

Ms Sturgeon said assertions that the case for independence had “hit a brick wall” were “wrong”.

She said: “Support for independence is rising. That is the way we win independence but also the way that we break the impasse on the right to choose.

The First Minister also addressed her future as leader of Scotland and her party, rubbishing claims she will be leaving the post and saying reports of frustration in her party have been “overblown”.

When asked if she will remain in her position for the next few years, Ms Sturgeon said: “Yes, I hope so.

“All leaders should reflect on an ongoing basis. For me, two conditions are needed for me to stay as leader – and I do intend to lead my party into the next Scottish Parliament election.

“You have to have the support, not just of party but of country. I would say, humbly, that I’ve just led my party to another landslide election victory, winning 80% of the seats.

“When either of these things cease to be the case then that’ll be the time for me to move on and do these other things that I’m keen to do in my lifetime.

“That is not now and it is not imminent.”