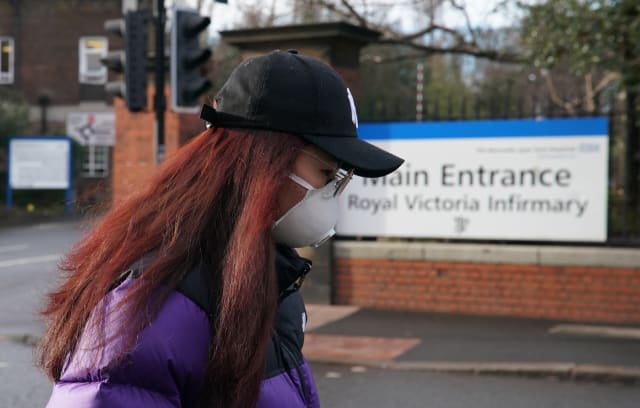 Four Britons rescued from a coronavirus-hit cruise ship are being treated at specialist centres in the north of England after testing positive for the illness.

Confirmation of the cases brings the total number of people to be diagnosed with the Covid-19 strain in the UK to 13.

The four – the first diagnoses in people brought back to the UK on repatriation flights – had been on the Diamond Princess cruise ship which had been stationed off the coast of Japan for more than two weeks amid the outbreak.

They were among a group of 30 Britons and two Irish citizens who arrived at a quarantine block at Arrowe Park Hospital in Merseyside on Saturday, but on Sunday NHS England confirmed the positive diagnoses.

The Department of Health said a “full infectious disease risk assessment” was done before the repatriation flight and that no-one who boarded the plane had displayed any symptoms of the virus.

Any more passengers who test positive will immediately be taken into specialist NHS care, the department said.

Professor Keith Willett, NHS strategic incident director for coronavirus, said the specialist centres are “well prepared to deal with cases” as he called for a calm approach in the face of any further potential cases.

He said: “We’ve seen in communities across the country a calm response to confirmed and potential cases of coronavirus, which will continue to be important as more of us might need to self-isolate for a time, to protect ourselves, our families and the community.”

The Department of Health said “appropriate arrangements” are in place at Arrowe Park, including strict separation of passengers from staff and from each other.

In a message to staff there, the chief executive of Wirral University Teaching Hospital NHS Trust, Janelle Holmes, said they had “always had a plan in place” for the event people would test positive and that the plan “has been carried out successfully”.

She said they had “followed clear guidance in relation to infection prevention control” in order to minimise the chance of it spreading.

Experts said it was unsurprising that some of the returned passengers had tested positive, because the ship “was not working as a quarantine”.

Professor Keith Neal, emeritus professor of epidemiology of infectious diseases at the University of Nottingham, said: “The UK authorities brought the passengers home as they would have continued to be at risk staying on the ship.”

Almost one-fifth of the 3,711 passengers originally on board the cruise liner have been infected and it is understood some British nationals who are part of the Diamond Princess crew had opted to remain on the ship.

The number of coronavirus fatalities from the Diamond Princess rose to three on Sunday, after Japanese authorities confirmed a local man aged in his eighties had died in hospital.

British couple David and Sally Abel, from Northamptonshire, who were on the cruise for their 50th wedding anniversary, are still in a Japanese hospital after being diagnosed with coronavirus and pneumonia.

Relatives said the couple are both “having a really tough time” and feel “very much in the dark” in terms of treatment, adding that they are awaiting further tests.

Hours before the latest UK cases were confirmed, 118 people were released from a coronavirus quarantine centre in Milton Keynes.

The group – who had been brought back to Britain earlier this month on a repatriation flight from Wuhan – spent 14 days at the Kents Hill Park training and conference centre.

They spoke of their relief at being allowed to return home on Sunday, with one man saying it felt “fantastic” to be out.

The training and conference centre has been professionally cleaned and will be back to business as usual from next week, NHS England said.

Of the 13 people in the UK diagnosed with coronavirus, eight have been discharged from hospital. One remains at St Thomas’ Hospital in London.

There had been more than 2,400 deaths from coronavirus in China and 17 elsewhere, the World Health Organisation (WHO) said on Sunday.

He listed South Korea, Japan and Iran as causes for concern and said a cluster of cases in Italy is “a big worry for Europe”.

He said: “The director-general of the WHO has recently spoken of a narrowing of the window of opportunity to control the current epidemic.

“The tipping point after which our ability to prevent a global pandemic seems a lot closer after the past 24 hours.”