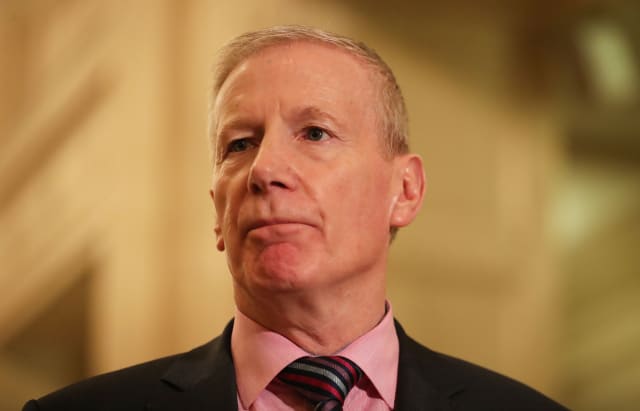 Among his planned engagements is a meeting with local civic, business and political representatives involved in the Unity of Purpose advocacy group.

DUP MP Gregory Campbell said that he, along with MLA Gary Middleton, had been keen to take part in the meeting but were unavailable on Monday due to business at Stormont and Westminster.

He claimed the Northern Ireland Office (NIO) “botched” the meeting plans by proceeding with the date despite their unavailability.

“For around 10 years, local leaders in political and public service have met regularly in the Unity of Purpose group to ensure that Londonderry and the wider North West had a collective voice when it came to putting forward our views on development and also in confronting those intent on bringing violence to our streets again,” Mr Campbell and Mr Middleton said in a joint statement.

“For the DUP, as the voice of unionism in the region, we felt it imperative that we fully participate. Indeed we have been to the fore in formulating ideas as the project has progressed.

“It is all the more regrettable that we have to speak out when new Secretary of State, Brandon Lewis MP, is making his first visit to Londonderry and is scheduled to meet with the UoP group.

“When the visit was first mooted last week, a number of us who wanted to be involved made it clear that Monday February 24 was not a suitable date given both Assembly and Westminster commitments for a number of representatives.

“Alternative dates were offered but despite this, the NIO decided to proceed in any case. This has meant that there will be no elected Unionist voice at the meeting.”

The DUP men warned: “Those in charge at the Northern Ireland Office need to radically reassess their outlook and the new Secretary of State must look again at visits like this, as the whole point of a discussion/decision-making forum like UoP is that it is representative.

“Today’s meeting is not.”

A UK Government spokesman responded with a brief statement.

“The Secretary of State has committed to meeting people from across the political spectrum in Northern Ireland, and from every walk of life. Following his visit to Belfast last week, Brandon Lewis wanted to visit the north-west at the earliest opportunity, and plans to visit other regions soon.”