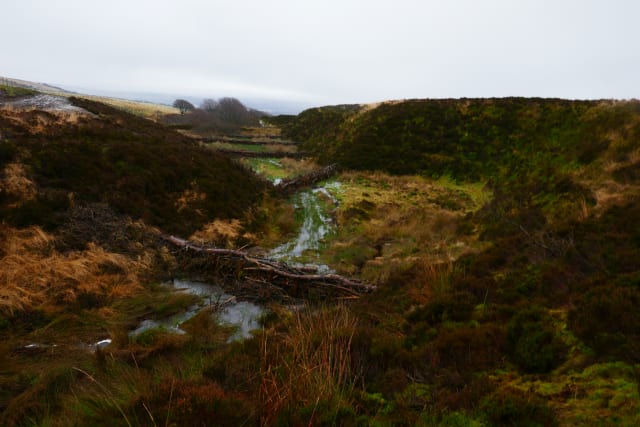 A landscape of moors and woods is being used to test how well upland flood defence measures can protect towns and communities below.

The pilot scheme is taking place at the Woodland Trust’s Smithills estate above Bolton to test out the effectiveness of “natural” measures to hold water in the uplands and slow its flow down to urban areas with big populations.

More than 25 different measures are being tried out including “leaky dams” made of log jams in strategic locations, wetlands and shallow excavations known as scrapes which can hold water in the landscape.

Dams made of peat or of seedless rush bales from nearby farms are also being tried out, and data is being gathered to assess changes in water flow as a result of the landscape features.

The research involves experts from Liverpool University and is being carried out in partnership between the Woodland Trust, The Mersey Forest and the Environment Agency as part of the “Natural Course” project.

It began in January 2019 and is expected to run until at least March 2021, but those behind the scheme say it is already producing positive results by reducing levels of excess water.

Recent survey evidence has also revealed a boost for wildlife, with the new environments attracting species such as the keeled skimmer dragonfly, in what is thought to be the insect’s first sighting in Greater Manchester.

Tracey Garrett,  from the Woodland Trust said: “Smithills is a mixture of moorland land, grassland and woodland.

“The research is all about discovering the effectiveness of flood prevention measures upland and how these can help alleviate the possibility of flooding in the lowlands.”

The Woodland Trust bought the 1,700-acre Smithills site – its largest in England – in 2015 with the aim to restore the moorland, plant more trees and  manage the landscape for wildlife and people.

The site was hit by wildfire in 2018, which damaged a third of the area, and the Trust has been looking to see how the estate can better cope with extremes such as fires and flooding in the future.

Michael Norbury at Mersey Forest said that in part the work was about making the site “more robust and able to cope with heavy rains or droughts, which are expected due to climate change”.

“By wetting more extensive areas of land; patches of the landscape may be more resilient to fire and also slow the flow during downpours,” he said.

It is hoped the findings of the trial will help inform decisions about how to make the UK more resilient to flooding, which is likely to increase as the climate warms.

With interest from the US Army Corps of Engineers, it could also inform flood prevention work further afield.