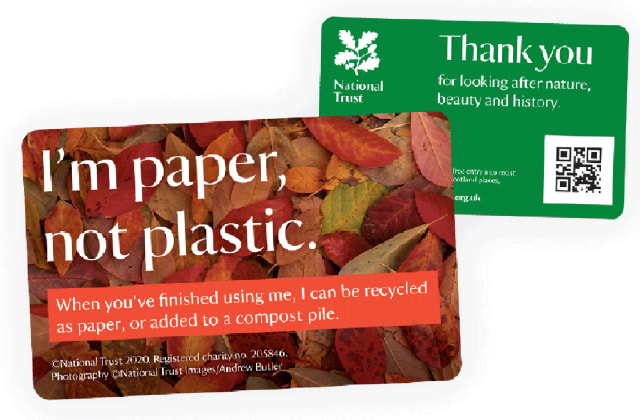 The National Trust has ditched plastic for the annual membership card it sends out to five million members, it has announced.

The new card will be made from a type of strong and durable paper featuring a tough water based coating, with the paper certified by the Forest Stewardship Council, and they are produced in a mill powered by its own biomass.

It will avoid the use of 12.5 tonnes of plastic – equivalent to two African elephants – from around five million membership cards which are issued annually, the trust said.

The new cards will be entirely recyclable and compostable, as well as a fraction of the cost of the old cards, which were made of plastic and chalk, a by-product of the mining industry.

The National Trust said the move is part of a range of measures it is bringing in to protect the environment and tackle the climate crisis, which surveying shows is backed by the majority of its members.

Mel Nursaw, from the Trust’s membership team, said: “Replacing our membership cards is a great step towards helping to reduce our impact on the environment, which we know is an important issue for so many of our supporters.”

At the end of the year, the new membership card can be composted, or thrown away with paper as part of regular household recycling.

In total, the National Trust now has almost six million members, including some people such as children and life members who do not receive an annual card.

The trust is also currently exploring how to transfer its physical cards to digital ones.

Elsewhere, the charity is looking at removing plastic from most of its greeting cards and wrapping paper, looking at alternatives to plastic tree guards and trialling drink dispensers to reduce the sale of bottled drinks.