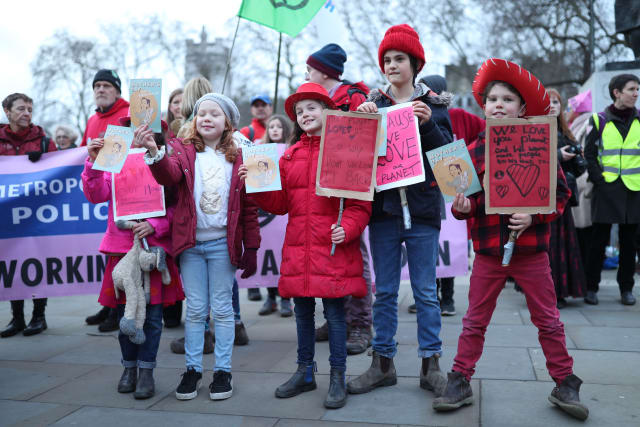 Grandparents and doctors were among hundreds of Extinction Rebellion campaigners who marched in London on Saturday to launch their new climate strategy.

The group’s 2020 plan is to recruit one million “active” supporters in the UK and ensure 50% of the nation recognises the Climate & Ecological Emergency as their top priority.

The activists also want to set up a Global Citizens’ Assembly on climate and ecological justice to address systemic issues around the environment.

Discussing the role the older generation needs to play, a protester called Hazel, part of subgroup XR Grandparents, told the crowd she “fears for the future”.

The subgroup aims to reach out to older people in the UK to encourage them to play an active role in campaigning.

Addressing the crowd, the grandmother said: “This greed and this plundering of our natural resources – none of that has a place in our vision of our future.”

Speaking to the PA news agency she told of her worries for her own grandchildren.

“When I look at my granddaughter playing with her doll that she is pushing around – practising being a mummy – I look at her and I think ‘will she get there?’ When she is old enough to have children will she think she should have them?”

“We are the people who have caused the most of it because we have lived the longest. It’s not as if we knew what we were doing but we feel that responsibility and we are taking it – that’s why we have this group so we can play a part.”

Protesters waved banners and flags with messages including “system change not climate change” and “destroy the patriarchy not the world”.

The strategy also demands the Government “tell the truth” by declaring a climate and ecological emergency.

Speaking to PA, Vishal Chauhan, a doctor and member of Extinction Rebellion’s subgroup XR doctors, said: “I’m here because I am terrified of the health impacts of the breakdown of our climate.”

He described the “crisis” as the “biggest threat facing the people of this country”.

“Politicians have promised more hospitals and more doctors but that’s not enough. At certain points we have to start looking at the root causes of certain illnesses,” Mr Chauhan added.

Saturday’s rally came two days after children and families from Extinction Rebellion held a “die-in” at the Science Museum against air pollution.

The group lay on the floor of the Making The Modern World gallery for 20 minutes wearing bespoke gas masks and holding signs referencing the impact on children’s health, including poor lung development.