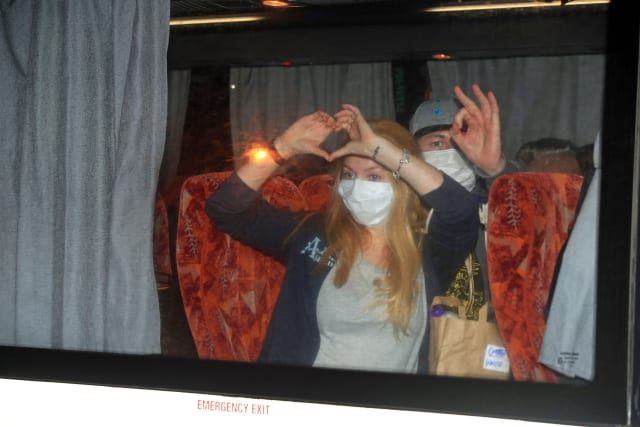 Evacuees from a coronavirus-stricken cruise ship have signalled they are OK as they arrived in Merseyside to be quarantined.

The group, who were trapped on the Diamond Princess cruise ship off the coast of Japan for more than two weeks, were bussed to Arrowe Park Hospital on the Wirral on Saturday.

One passenger was pictured making a heart sign with her hands while another gave an OK signal through the coach windows as they pulled up just before 6pm.

The masked passengers were split between three coaches along with medical professionals wearing white hazmat suits.

Two police cars, two ambulances, several police motorbikes and a fourth coach with no passengers were also in the convoy.

An accommodation block, separate to the main hospital building, will be home to the evacuees for the next fortnight as they undergo health checks in quarantine.

The passengers, who all tested negative to having Covid-19 before they flew, were brought back to the UK on a repatriation flight on Saturday.

The plane, carrying 32 British and European evacuees from the vessel, touched down at Ministry of Defence base Boscombe Down in Wiltshire shortly after 11.30am.

As with the previous coachloads brought to Arrowe Park, the bus drivers were not wearing any protective clothing but Public Health England said seating arrangements ensured they were never in close contact with passengers and therefore not at risk.

It is unclear where the small number of EU citizens will be taken following the arrival of the plane, which also carried British government and medical staff.

The four Britons on board the Diamond Princess who have recently tested positive for coronavirus were not on the flight.

Arrowe Park was previously used to host 83 British nationals for a 14-day quarantine period earlier in February after they were flown out of Wuhan in China, which has been at the centre of the outbreak.

Speaking on Saturday, she said the quarantined group will be “safe, well-managed and comfortable” during their stay at the quarantine accommodation blocks – while the staff previously living there remain in nearby hotels.

Before the flight, one passenger who was diagnosed with Covid-19 and has since been given the all-clear joked that the experience would be like visiting a holiday camp.

Honeymooner Alan Steele was taken to a Japanese hospital and has since tested negative for the virus and been reunited with wife Wendy.

“Wendy’s test was negative so ‘Butlins the Wirral’ here we come for 14 days,” Mr Steele posted on Facebook.

Since being kept on board the cruise liner in the port of Yokohama, a total of 634 passengers and crew have been infected, accounting for more than half of all the confirmed coronavirus cases outside of China.

It is understood some British nationals who are part of the Diamond Princess crew opted to remain.

The family of David and Sally Abel, from Northamptonshire, said they have now been moved to a “prison”-like hospital.

The couple were on the cruise for their 50th wedding anniversary when it was placed into quarantine.

Mr Abel has been diagnosed with acute pneumonia while Mrs Abel has a mild case.

Although they were originally in a hospital just 90 minutes from the coronavirus-stricken cruise ship, Mrs Abel called her son in the middle of the night to say the couple were suddenly being moved to a different “three-star” hospital.

Britons in Cambodia who left another cruise ship, the Westerdam, and who have been cleared for travel, are also being assisted by the Foreign Office to make their way home.

All have tested negative after one case was diagnosed on board.

Meanwhile dozens of other quarantined patients are set to be released on Sunday.

Around 150 people who were brought to the Kents Hill Park hotel and conference centre in Milton Keynes earlier this month, having flown back to the UK on an evacuation flight from the virus-hit Chinese city of Wuhan, are due to be allowed home.

In order to help combat the spread of the virus in the UK, the NHS has started pilots of home testing for coronavirus where NHS staff, including nurses and paramedics, will visit people in their own homes.

As of Saturday afternoon there were no new cases of coronavirus detected in the UK, the Department of Health said.