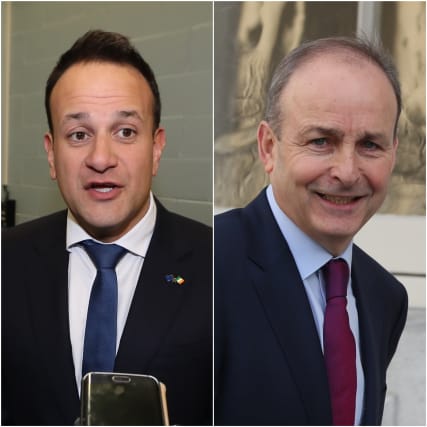 Leo Varadkar and Micheal Martin have agreed to meet for exploratory talks next week as efforts to form a government intensify.

The leaders of Fine Gael and Fianna Fail will get together next week after TDs failed to elect a new taoiseach on the first day of the new Dail on Thursday.

Mr Varadkar tendered his resignation to President Michael D Higgins on Thursday night but he will remain in place as caretaker taoiseach until a new one is elected.

A spokesman for Fine Gael said the date and time of the meeting has yet to be confirmed.

“The Taoiseach spoke by phone to Micheal Martin yesterday evening.

“They agreed to meet in person early next week for exploratory talks.

“Fine Gael has also accepted the offer from the Greens for exploratory talks next week,” said the spokesman.

Mr Varadkar said on Monday he was preparing to go into opposition and that he would only seek a coalition with Fianna Fail as “a last resort”.

On Thursday, The Dail failed to elect a taoiseach at its first sitting after the election as none of the leaders of the four main political parties nominated for taoiseach emerged with a majority to secure the role.

Ms McDonald received the most votes to become the next taoiseach, 45, but was well short of the required figure of 80.

Meanwhile, Sinn Fein has been meeting with smaller parties and independent TDs in a bid to form a government without Fine Gael or Fianna Fail but may not have enough support to do so.

Fine Gael and Fianna Fail have ruled out going in to coalition with Sinn Fein, citing its left-wing economic policies and the party’s past links with the IRA.