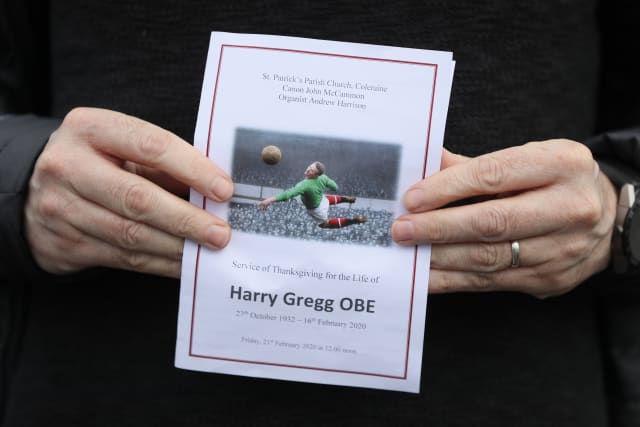 Manchester United great Harry Gregg wanted to be remembered as a footballer, not the hero of the Munich air crash, his funeral has heard.

Sir Bobby Charlton, one of the players Gregg pulled from the wreckage of the burning plane, was among mourners who gathered to say farewell to a goalkeeper whose courage in the aftermath of the 1958 disaster is part of club folklore.

The former Northern Ireland international, who was named the best goalkeeper of the 1958 World Cup, died earlier this week aged 87.

He will be forever associated with the tragedy in Munich in February 1958, when a plane transporting Matt Busby’s young Manchester United side back from a European game in the former Yugoslavia crashed on a snowy runway after a refuelling stop.

Gregg survived the crash that claimed 23 lives and twice returned to the burning fuselage to drag United teammates and strangers to safety.

He rescued United players Sir Bobby and Dennis Viollet from the BEA Flight 609, as well as a 20-month-old baby and her badly injured pregnant mother.

His funeral coincidentally was held on the anniversary of Duncan Edwards’ death.

The 21-year-old United and England star was the final victim of the disaster, dying in a Munich hospital two weeks after the tragedy.

The town centre church was packed to capacity, with a large crowd listening outside in the rain.

BBC NI sports presenter Stephen Watson, who accompanied Gregg back to the crash site for a 2008 documentary to mark the 50th anniversary, delivered a eulogy as his widow Carolyn and other family members watched on.

He said the disaster left a scar on the rest of his life as he dealt with the twin torments of guilt and grief.

“Harry Gregg’s notoriety because of the Munich air crash came at a price – it cast a shadow over his life that he found difficult to dispel, but he always carried it with grace,” he said.

“Harry was determined that even though Munich shaped his destiny, it would not shape his life.

“Harry’s actions, though, on the runway that fateful day meant he transcended sporting greatness.

“He was called the Hero of Munich, but he always wanted to be remembered simply as a footballer and a coach of some repute.

“In his own words: ‘I’m Harry Gregg from 34 Windsor Avenue in Coleraine who played football – I was useful on some days and rubbish on others. That’s how I want to be remembered. Not for something that happened on a spur of a moment’.

“Harry Gregg. What an incredible man, and what a remarkable life. We will never forget you. We celebrate your life today.”

In nine years at United, Gregg played 247 times, including in a 3-0 win over Sheffield Wednesday just 13 days after the Munich tragedy.

Gregg’s son John-Henry paid tribute to his father on behalf of the family. He joked that his arrival in heaven may disturb the tranquillity.

“I believe my dad’s life is something – even though we are hurting – that should be celebrated because, as they say, he certainly was a one off,” he said.

“On behalf of my family, and my dad would definitely have wanted me to say this, this is also the day that Duncan Edwards lost his fight in a hospital in Munich and we think his family should be mentioned,” he said.

“Some of his family are here today, so like every Manchester United supporter it’s important.”

Long-time friend Liam Beckett raised a laugh among the mourners when he joked that so many of his stories about Gregg would not have been suitable for a church.

Referring to the stopper’s renowned forthright manner, Mr Beckett said: “He could be quite outspoken, we all know that, and he didn’t always say what people wanted him to say and that’s another reason why I admired him immensely.

“He spoke what he felt, he spoke what he thought was right. So many people nowadays, and sport in many ways has become false, (but) never when Harry was about, because he told the truth.”

Former Manchester United player Sammy McIlroy was also among the mourners, as was his ex-international teammate with Northern Ireland, Gerry Armstrong.

He was predeceased by his first wife Mavis and daughter Karen.