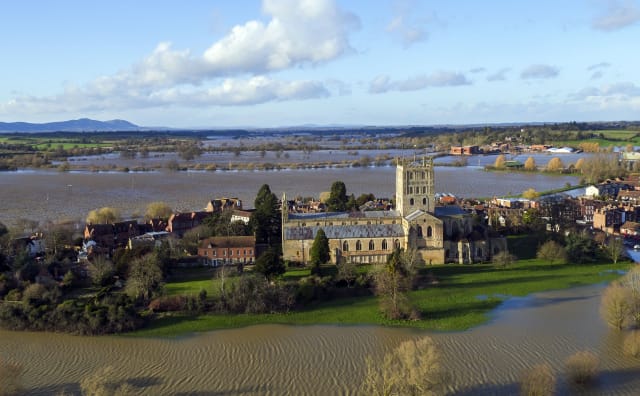 Heavy rain over the weekend could bring further flooding misery, the Environment Agency (EA) has warned.

Almost continuous wet weather for the past fortnight has seen England receive 141% of its average February rainfall so far, the agency said as it warned the deluges are set to continue into next week.

It said that spells of heavy rain over the weekend could lead to further flooding in parts of the North and the Midlands.

And a spokesman said that “ongoing river flooding remains probable for the River Severn on Monday and Tuesday”.

The warnings were issued on Friday as large areas of South Wales and the Midlands continue to battle extensive flooding and massive clear-up operations have started where water levels have fallen.

Caroline Douglass, director of incident management at the EA, said: “Flooding has a long lasting and devastating impact on people’s lives, and our thoughts remain with all those who have been flooded and continue to feel the impacts of the persistent wet weather.

“Further spells of rain in northern England from today (Friday) and into the weekend, which are also expected into next week, could cause further flooding, particularly across the Pennines and parts of northern England, York and the Midlands.

“Ongoing river flooding remains probable for the River Severn next week as it responds to heavy rainfall.

“This will be the third weekend of exceptional river levels and stormy weather.

“With the effects of climate change, we need to prepare for more frequent periods of extreme weather like this.

“People need to be aware of their flood risk, sign up to flood warnings, make a flood plan and not to drive or walk through floodwater.”

On Friday afternoon, the EA said there were two severe flood warnings, meaning there is an immediate risk to life; 72 flood warnings and 140 flood alerts across England.

There were also one flood warning and three flood alerts in Wales.

The EA said that river levels have exceeded existing records with the Colne, Ribble, Calder, Aire, Trent, Severn, Wye, Lugg and Derwent among the many rivers where records have been broken.

But the agency said that, even with record river levels, the number of homes flooded has been fewer than in other major flood-events of the last 20 years.

An EA spokesman said its teams have put up more than 6km of temporary flood barriers and flood defences have protected nearly 25,000 properties from the ongoing impacts of Storm Dennis, which hit a week ago.

But fresh yellow warnings have been issued for South Wales on Sunday and the north of England on Monday.

There is also a yellow warning for snow and ice across much of Scotland on Saturday.

Honister Pass in Cumbria, one of the wettest areas of the UK annually, recorded 185mm of rain in 36 hours on Thursday while 72mm was recorded in Shap, Cumbria.

Capel Curig in Snowdonia, north Wales, recorded 86mm of rain in 36 hours after setting Wednesday’s record for rain with 80mm in a single day.

Hundreds of people have been evacuated from their homes in the worst-affected areas following days of flooding in the wake of Storm Dennis.

A fundraiser launched by Good Omens actor Michael Sheen on Wednesday evening has since doubled its initial target of collecting £10,000 for Welsh people affected by Storm Dennis.