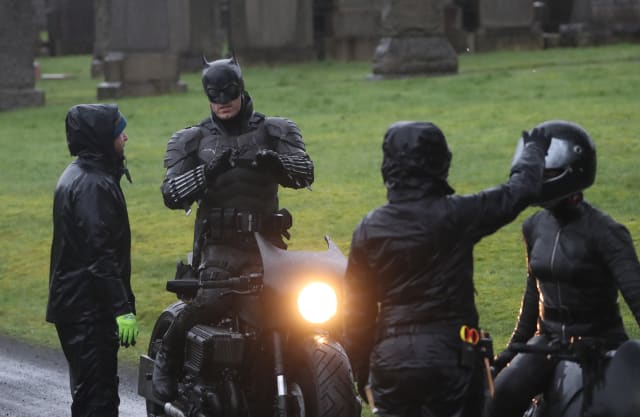 Filming for The Batman has begun in Glasgow, with new images showing the Dark Knight's new suit.

The production comes to the Scottish city for the new Warner Bros and DC Comics movie being released next year, with road closures in place until Sunday.

Crews were set up around the Necropolis cemetery near Glasgow Cathedral and Glasgow Royal Infirmary – with someone in the famous suit riding a motorcycle.

However, it is thought to be a stuntman seen on Friday afternoon rather than Twilight star Robert Pattinson, who will portray the dual role of Bruce Wayne and the Batman.

As rehearsals progressed, the costumed man could be seen wiping the rain away from his goggles as the city thought to be doubling up as Gotham was hit with a yellow weather warning on Friday.

It comes a week after director Matt Reeves shared a first look at the suit in a tweet with the hashtag #CameraTest.

The filming in Glasgow will see a number of roads closed including Wishart Street, Ladywell Street, Cathedral Square, Drygate and John Knox Street.