Blue passports to be issued from next month to mark Brexit 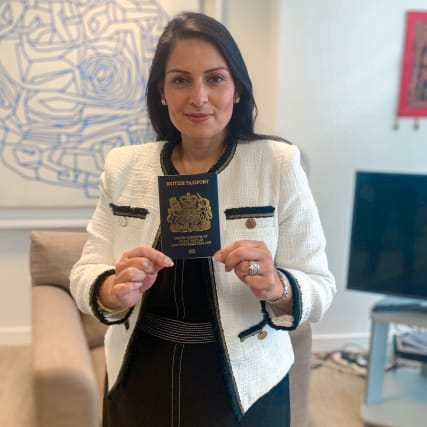 Blue passports will be issued for the first time in almost three decades from next month to mark Britain's departure from the European Union.

Championed by Brexiteers, the new-look documents will replace the burgundy passports which were rolled out in 1988.

The contract to produce the passports was controversially awarded to French firm Thales, but the documents will continue to be personalised with the holder's details in the UK.

As well as the colour change, the back cover of the new passports will now feature embossed floral emblems of England, Northern Ireland, Scotland and Wales.

Home Secretary Priti Patel said that by returning to the "iconic" blue and gold design, the passports will "once again be entwined with our national identity".

World's most powerful passports
Japan has the most powerful passport in the world. Source: Getty Images
Red Singapore passport
Studio shot of a set of french identification documents. From front to back, a
German passports most powerful
Two South Korean passports isolated on a white background.
Four Danish Passports. Red European Community Passports.
finnish passport
An italian passport out of the pocket of denim trousers
Detail of an spanish passport. Documentation for travelers
Swedish passport folded on wood rustic background.
'Electronic passport with some Euro/Thai money and a Thai Arrival Card, isolated on white background'
Close-up on a Luxembourg passport isolated on a white background.
Two dutch passports on wooden tabletop.
Regular Norwegian passports are burgundy in colour, with the Norway Coat of arms emblazoned in the top of the front cover. The new biometric Norwegian passport has the standard biometric symbol at the bottom.
Portuguese Passport cover, with European Union burgundy color - Portugal's biometric passport - An ePassport aka digital passport uses contactless smart card technology to store the identity data of the traveler - photo by M.Torres
Everything you need to know about passports and visas after Brexit
Photo Taken In United States, Dallas
Passports rankings
Up Next

She said: "Leaving the European Union gave us a unique opportunity to restore our national identity and forge a new path in the world.

"By returning to the iconic blue and gold design, the British passport will once again be entwined with our national identity and I cannot wait to travel on one."

The new passports are said to be the greenest and most technologically advanced yet, with new and updated security features to keep personal data secure.

Former MEP McMillan-Scott, told the Guardian, that scenes at Schipol Airport in Amsterdam were a sign of things to come. McMillan-Scott warned that Britons carrying new and old-style passports could face confusion with border guards.

Blue passports were first used in 1921, and remained the colour of choice until the UK joined the EU (then the European Economic Community) and a change to burgundy was later agreed to harmonise designs across member states.

Burgundy passports can still be used for travel until they expire.