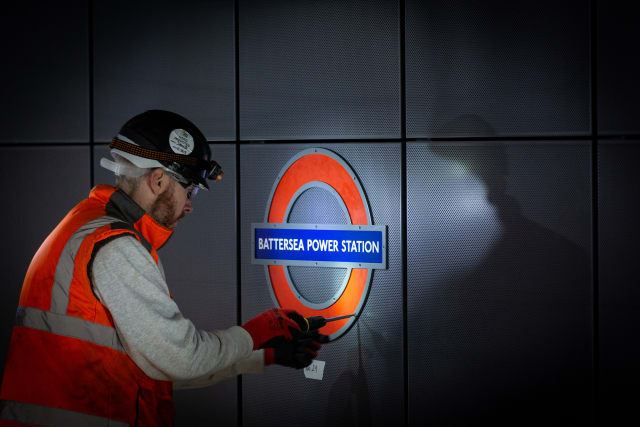 London Underground roundels have been installed as part of the network’s first major expansion in more than 20 years.

The signs were added to platform walls at a new south London station named Battersea Power Station, which is due to open alongside Nine Elms in autumn 2021.

Both areas are undergoing major redevelopment.

A total of 113 roundels are being manufactured for what are the first new Northern line stations since Morden in 1926.

The £1.2 billion extension of the line will bring Battersea and surrounding areas to within 15 minutes of the City and the West End.

The last major expansion of the Tube was the Jubilee line in the late 1990s.

London’s deputy mayor for transport Heidi Alexander said: “It’s really exciting to see roundels now in place at Battersea Power Station. It makes the opening of the extension next year feel so much closer.

“These are the first new Northern line roundels in nearly 100 years and their arrival brings to life the huge difference the extension will make – easier journeys for thousands of Londoners, as well as supporting the creation of new jobs and homes in our city.”

Transport for London’s director of major projects Stuart Harvey said: “The roundel is recognised around the world as the symbol of London’s transport network so it’s a highly significant moment when the first one is installed at a new station.

“As well as new roundels, our two Northern line extension stations now have track, platforms and escalators as their transformation from concrete shells to state of the art stations continues apace.

“The arrival of the new roundels also demonstrates how sustained investment in the capital’s transport infrastructure benefits not only Londoners but the whole country, through the extensive business supply chain.”

The project is currently focused on fitting out the new stations, installing power supplies and extending signalling systems.

The London Underground roundel dates back to a platform sign at the station now known as St James’s Park in 1908.

It was designed to stand out against adverts on platform walls.