Teenage birdwatcher in plea over environment as she receives honorary doctorate 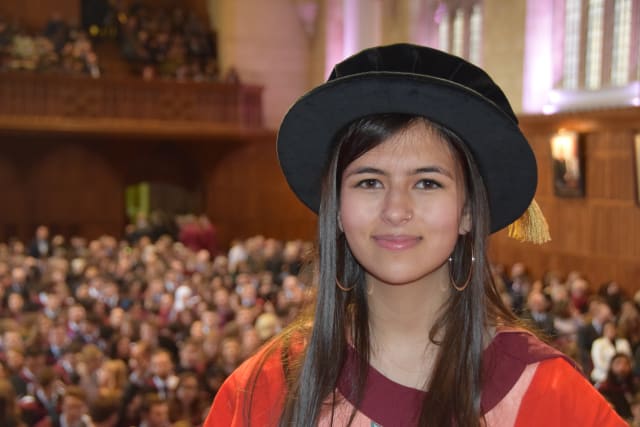 A teenage birdwatcher has urged students to “tackle the environmental crisis” as she became the youngest Briton to receive an honorary doctorate.

Mya-Rose Craig, 17, received the doctor of science degree during a ceremony at the University of Bristol on Thursday – three months before she is due to sit her A-level exams.

She is the youngest person to be given such an award, with education campaigner Malala Yousafzai receiving a master of arts degree from the University of Edinburgh aged 16 in 2013.

“Slowly, change is happening but it needs to occur much faster,” she told graduates in her impassioned speech at the university’s Wills Memorial Building.

“We need to encourage everybody from every community to tackle the environmental crisis we find ourselves in.

“Now more than ever, it is important to recognise that inequality of engagement creates inequality of opportunity and an unequal world is not a sustainable one.

“I hope that everyone will have their light bulb moment, like I did, when they realise what they really care about and want to fight for.”

She called for those graduating to use their skills to “really go out and change the world for the better”.

“You are the change makers of tomorrow,” she told them.

“I have no doubt that you’re going to go on and do great things, and I believe that it is important to remember the people who were not able to go to an elite university in a first world country.

“Not to apologise for how fortunate you are, but to understand that you are in a position of privilege and that with privilege comes responsibility.

“Responsibility to provide others with the opportunity to break through ‘glass ceilings’ and ensure diversity and inclusion is at the forefront of your minds.”

The teenager, from Compton Martin in Somerset, has been a keen ornithologist for almost all her life and is the youngest person to see half of the world’s bird species.

She has a large following on Twitter, where she posts as BirdGirlUK, and began running nature camps when she was just 13.

Mya-Rose has set up the organisation Black2Nature, organised two conferences, given more than 50 talks and written articles in her fight for equal access to the natural environment for all communities.

She was nominated for the honorary degree by Dr Rich Pancost, head of earth sciences at the University of Bristol.

Dr Pancost has known the teenager for five years, since she was an ambassador when Bristol was the European Green Capital.

He told graduates the university was “so proud” of their many years of work to achieve undergraduate degrees, as well as masters and PhDs.

“To bestow a comparable honour on someone who is only 17 years old is not a decision we take lightly,” Dr Pancost said.

“It is reserved for those who are leading truly special projects, courageous projects, transformative projects.

“Mya-Rose is doing exactly that.”

Dr Pancost said the campaigner had achieved “international acclaim” as one of the world’s youngest birdwatchers and was the youngest person to see 5,369 birds – half the world’s species.

He paid tribute to Mya-Rose for using her platform to campaign for diversity and inclusion, despite racist attacks.

Mya-Rose is currently studying English literature, Spanish and media studies at A-level and will sit her exams in May.

She plans to take a gap year before going to university to study politics and international relations.

In 2016, the teenager organised a conference entitled Race Equality in Nature, which was attended by 90 people.

She is now planning another conference, focusing on how to make wildlife films relevant to all communities.