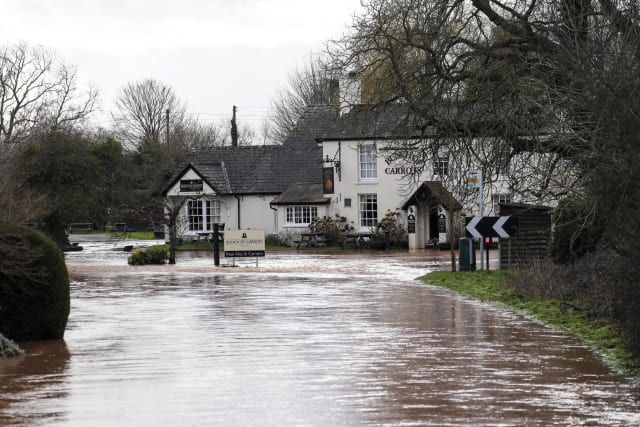 Flood-hit residents in the Wye and Severn valleys are being urged to remain vigilant despite river levels falling below recent peaks, which included the highest ever reading in Hereford.

A multi-agency briefing held on Thursday heard emergency planners may have to re-think “models for what unprecedented looks like” following widespread flooding in Shropshire, Worcestershire and Herefordshire.

The meeting at West Mercia Police HQ at Hindlip Hall, near Worcester, included representatives from local councils and other agencies tasked with flood prevention and recovery.

Asked to comment on forecasts for levels on the Wye and Severn on Friday, Environment Agency deputy director Dafydd Evans said: “Our current models are predicting that those levels will be significantly less than what we have seen from Storm Dennis.”

But Mr Evans urged people living near rivers to remain vigilant, adding: “We continue to see some rain over the weekend – the likely result of that is that it is going to keep flows and river levels very, very high.

“That’s why we are still asking people to be vigilant – there will be water on roads and water around properties.

“Unfortunately the forecast into next week from the Met Office is that it still remains unsettled, so we will have to see into next week how that goes.

“But we are ready for that.

Explaining what had contributed to record flooding levels, Mr Evans continued: “Part of what we saw with Storm Dennis that was such an issue is that heavy rain was really quite widespread over the whole of West Mercia – and when you get that heavy rainfall not just in the headwaters but all through the catchments that’s what really led to those very, very high record levels.”

The chief executive of Herefordshire Council, Alistair Neill, thanked volunteers for their fantastic work alongside key agencies, including the local authority, as more than 300 homes were affected by the floods.

Urging those involved in tackling flooding, including central Government, to listen to the experts in formulating policy, Mr Neill said: “We’re not going to be dealing with this sensibly if we simply respond to emergencies when they happen every single year, when we could actually plan differently for them.

“I think listening to the experts is where we need to really need to sit down and do a lot of work.