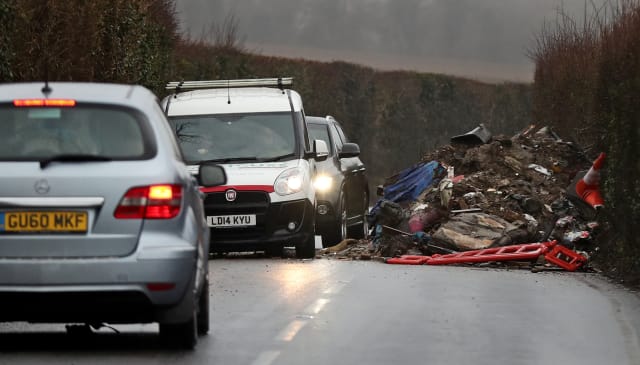 Tons of rubbish dumped in a giant heap on a busy Kent road in the dead of night have been causing chaos for drivers on Thursday.

Frustrated drivers were forced to crawl along a stretch of country road this morning after a massive fly-tipped pile the size of a car.

The gigantic pile – measuring about 13ft long and 5ft high – has been blocking an entire side of the road, meaning that cars had to inch past to get by.

Drivers were seen having to slam on their brakes as they spotted the heap on the 60mph country lane before waiting for a gap in incoming traffic to safely pass by.

As they drove past, many rolled down their windows to get a better look at the heap of rubbish that was slowing down their journey.

The pile is believed to have been dumped in the road between midnight and 2am on Thursday morning.

Bromley Council said it was aware of the fly tip and was taking urgent action to clear the busy road.

It said it regularly offers rewards for information leading to the conviction of fly tippers and would be issuing a further statement later.