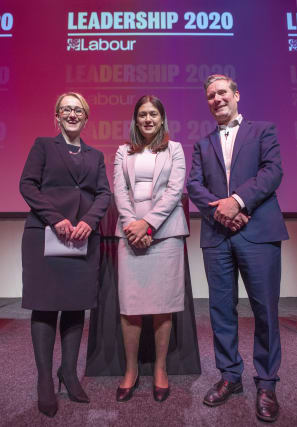 Labour leadership contender Lisa Nandy has confirmed she would serve in a shadow cabinet led by one of her two rivals.

The Wigan MP said she would be “proud” to serve on the opposition front bench for either Sir Keir Starmer or Rebecca Long-Bailey.

The trio all progressed to the final round of the three-month long competition last week, having secured enough nominations to ensure their names were on the ballot.

And Ms Nandy has signalled that there would be no bad blood should one of her competitors beat her to the top spot on April 4, with voting due to begin on Friday February 21.

Asked on ITV’s Good Morning Britain whether she would serve in the shadow cabinet should she fail in her bid to become leader, she said: “Yeah, of course.

“What you don’t actually realise is we are quite good mates behind the scenes, there’s a camaraderie that comes from being put through this process.

“We’re the only people who understand how tough it is and, yes, I’d be proud to serve in their shadow cabinets.”

It comes after shadow Brexit secretary Sir Keir refused to commit to having leadership opponents in his shadow cabinet if he replaces outgoing leader Jeremy Corbyn.

Speaking at a leadership hustings in Glasgow last week, he “saluted” Ms Long-Bailey and Ms Nandy but would not say if either of them would be in his team.

During her appearance on GMB, Ms Nandy also skipped over former prime minister Tony Blair’s name when listing the greatest past Labour leaders.

Mr Blair is due to make a speech in central London on Thursday to mark Labour’s 120th anniversary, urging the next leader to begin a “radical” overhaul of the party’s policy platform to make it fit for the 21st century.

He will also, in a bid to ensure his message is heard, remind those left in the leadership tussle that he is the only surviving Labour leader to have won a general election.

But, while Ms Nandy said the New Labour years were “game changing”, the former shadow energy secretary said Mr Blair did get “things wrong” during his decade in Downing Street.

Asked on the programme who the best past Labour leader was, Ms Nandy said: “I think in all honesty there have been a lot.

“(Clement) Attlee is the one we always talk about, Barbara Castle was the great leader that never was and, if she’d been a man, I’m sure she would have become the leader of the Labour Party.”

Pushed on why she did not choose Tony Blair and the New Labour era, Ms Nandy said: “I’d like to see us be more radical.