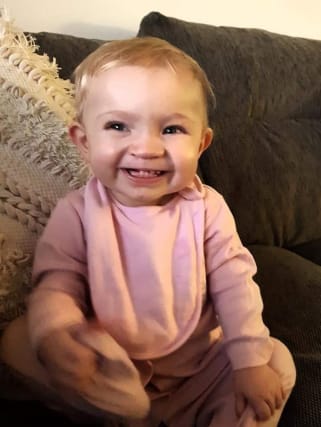 A father has been convicted of killing his 14-month-old daughter who suffered a catalogue of injuries.

Daniel Ashurst, 33, was cleared by a jury at Manchester Crown Court of murdering Hollie Ashurst but found guilty of her manslaughter.

Hollie sustained bruises and abrasions to the head and neck area, bleeding on the brain and in the eyes, a broken ankle and two possible bite marks to her hand and thigh.

Daniel Ashurst, 33, was said to have shaken her in a violent temper while alone with the youngster at the family home in Shevington, Wigan. Hollie died in hospital the following day.

Ashurst told medics his daughter had tumbled down two steps on the stairs at the family home in Fleming Court on February 28 but in a defence statement seven months later he claimed a series of unfortunate accidents had befallen his daughter.

In a rush to get her to hospital he said she fell further down the staircase when he slipped and lost grip of her as his shorts pocket snagged something on the way down.

Ashurst then claimed Hollie flew out of her car seat as he braked heavily at a set of traffic lights.

The Crown said his explanation for the injuries was “nonsense” and was fabricated in a bid to fit the medical evidence.

Jurors were told they could only convict Ashurst of murder if they found he had assaulted her and intended to cause her death or serious injury.

Instead they unanimously agreed he intended to cause her some harm short of serious injury or he realised some harm was likely to be caused.

Unemployed Ashurst was on medication for anxiety and depression and admitted he drank three of four cans of lager nightly – and took cocaine two or three times a week to help him relax.

He used cocaine on the evening before the fatal injuries were said to have happened, the court was told, but he said it had no effect on him the next day after “a good night’s sleep”.

Ashurst denied ever harming her.

The defendant was remanded in custody until sentencing on February 26.