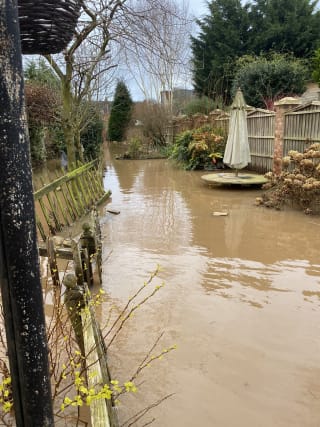 Residents in Worcester who have been flooded out of their homes for five days say they are still uncertain when they will be able to return, amid forecasts of further heavy rain.

All but two of the 24 residents of Diglis Avenue, which is situated on the bank of the River Severn, have been forced to abandon their homes as water reached “waist-height”.

Resident Amanda Cartwright, 44, said that although she had been aware of the flood-risk, the experience had been “thoroughly depressing” and “emotionally tiring”.

Ms Cartwright approached the council online and posted a picture of her submerged garden, saying: “Unbelievable my house has been underwater for so long.

“Water still at windowsill height at front and mid-thigh in back garden. Still two inches inside but going down slowly.

“Five days and I know you’re busy and we have had a call once a day but would be nice to see someone in person?”

Robin Walker, MP for Worcester, responded saying that he had been unable to reach the house in person due to the high water levels.

Speaking to the PA news agency, Ms Cartwright said: “It’s gone down quite a bit now. It was waist-high in the garden with two to three feet inside the house.

“If you stand in our garden it’s still past your waist, if you went down the stairs at the front of the house, you would be submerged.”

She added that she and her husband Ade, 50, were currently staying in temporary accommodation in the city centre, but did not know when they would be able to return home.

“We moved out on Sunday. The floodgates on the front and back did their job, but the water came up through the floor – within 10 minutes it was two-feet high,” she said.

“We grabbed as many important things as possible and got out.

“We can’t do anything until the water goes down – it all depends on the predicted heavy rainfall. We just don’t know but I’m hopeful by Sunday or Monday we’ll be back in.”

Ms Cartwright said that it was not uncommon for the riverbank to overflow and that the house had previously been flooded in 2014 and 2007.

“We knew when we moved into the house it was a risk of flooding – you get used to it and prepare for that – you can never be flood-proof, you can only be flood-friendly,” she said.

“But when it actually does happen it’s just thoroughly depressing – I love my home. I’m not angry at anyone I’m just so frustrated and it’s emotionally tiring – you just want normality.”

“I’m not upset, we’re safe and our neighbours are safe.”

Ms Cartwright added that she had “great admiration” for the Environment Agency (EA).

She said: “People give them a tough time but they have done an amazing job – people don’t appreciate what they do. The council could learn a lot from the EA.

“I just hope that people take the feedback on board and that they learn from it.”