Coronavirus: British couple diagnosed in Japan say they are happy with treatment 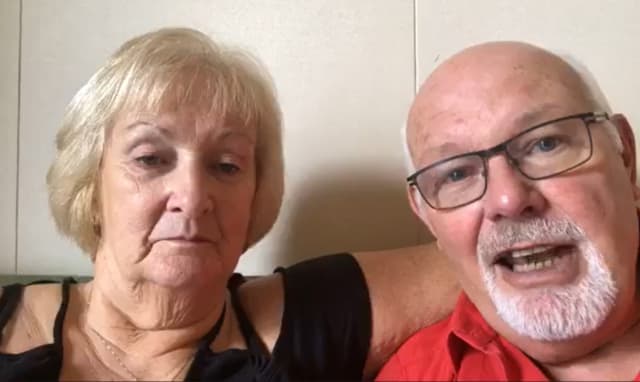 A British couple diagnosed with coronavirus in Japan have said they are “in the best place” as they posted pictures from their hospital beds.

David and Sally Abel, from Northamptonshire, have been transferred for hospital treatment from the Diamond Princess cruise ship, which has been quarantined near Yokohama, Japan.

Around 70 other Britons from the ship are due to fly back to the UK from Tokyo on Friday on a repatriation flight organised by the Foreign and Commonwealth Office.

In a Facebook post, Mr Abel said: “We arrived in lovely hospital a couple of hours ago.

“Outside the hospital I came over a bit weird and nearly passed out. Every pore on my body opened and i was wheelchaired to our room.

“Full health inspection and now we know what’s going on. We both contracted a cold (unaware of) and it has not yet turned into pneumonia. (we do have coronavirus).

“We are both in the best place! They do know what they are doing and our two nurses are gorgeous. Sally likes the Dr too.”

He added: “Wi-fi will not work for me, so this will be the final communication for some time.

“See you all before you know it.”

In further posts, Mr Abel said his wife Sally had a bed in the same room as him and that they were “thinking of all the Brits flying to UK tomorrow.”

He also said it was “impossible to send or receive emails” and he was unable to contact the British Embassy or his family.

Another British national on the ship who has recovered from the virus posted on Facebook on Wednesday to say he is heading home.

Alan Steele said: “Informed we will have to do another 2weeks quarentine (sic) back in blighty although japan has set me free as all ok.”

Foreign Secretary Dominic Raab confirmed the evacuation flight for British nationals on board the Diamond Princess cruise ship will leave from Tokyo.

He said: “Details have been sent to those who have registered for the flight. We urge other British nationals still seeking to leave to contact us.

“We will continue to support British nationals who wish to stay in Japan.”

The update comes as authorities in Tokyo said two elderly Japanese passengers taken off the ship have died from the virus.

Meanwhile, a Department of Health and Social Care spokesman said on Wednesday that those Britons repatriated from the Diamond Princess will be quarantined for 14 days at Arrowe Park Hospital on the Wirral on their return.

There were 78 British passengers on the cruise liner when cases of the coronavirus strain known as Covid-19 started to emerge.

Four British cases have since been confirmed by the Foreign Office.

The Foreign Office has said Britons diagnosed with coronavirus will continue to be supported while they undergo treatment in Japan.

Meanwhile, the European Commission has announced the EU will be financing the repatriation of citizens from any of the EU27 still stuck on the Diamond Princess.

As of 2pm on Wednesday, a total of 5,216 people in the UK have been tested for coronavirus, of whom nine have tested positive.

Reports on Wednesday from mainland China said there have been 2,004 deaths and 74,185 confirmed infections of the virus.

New cases have fallen to less than 2,000 per day for the past two days but officials and analysts have warned that the threat of a more serious outbreak remains as people gradually return to work following a prolonged Lunar New Year holiday.

While the overall spread of the virus appears to have been slowing, the situation remains severe in Hubei province where the virus is thought to have originated.

In Pictures: Sunseekers make a splash as lockdown restrictions begin to ease