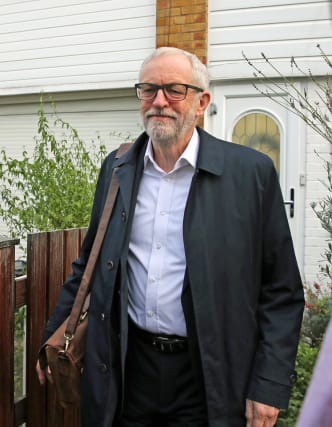 Labour leader Jeremy Corbyn has challenged Prime Minister Boris Johnson to go and visit flood-hit communities, telling him: “Go and talk to them.”

Mr Corbyn criticised the Prime Minister for not visiting the areas of South Wales and the Midlands which have been badly affected by the aftermath of Storm Dennis.

He said the Government should have convened the emergency committee Cobra to oversee the response to the flooding.

The Government hit back with Environment Secretary George Eustice accusing the Labour leader of “trying to politicise the floods”.

Speaking during a visit to South Wales, Mr Corbyn said he was not surprised Mr Johnson had not been to the area.

“Sadly, I’m not surprised but I do think that it’s the duty of the Prime Minister to be there in places where there are difficulties, whether there is an election or not,” he said.

“And I’ve come today, not to interfere with any recovery work, but just to listen to people and hear their experiences, and it’s heart-breaking.

“And that is an area of national policy that’s got to be looked at.”

“Think how you would feel if your house was flooded.”

Mr Corbyn went into the homes of several residents living in Wordsworth Gardens, Rhydyfelin, who suffered flood damage over the weekend and praised their community spirit.

“You can only feel sympathy and empathy for them because you are in your home, you’re asleep and you hear a loud bang and you don’t know what it is,” Mr Corbyn said.

“Then you go outside and see the walls have been pushed down by floodwater and floodwater is coming into your home.

“One lady was telling me that her 18-year old son went out in the flood and managed to find the flood defence barrier and stick it up, which didn’t stop all the water getting in but helped save a lot of things in their house.

“Another told me how they kicked out a piece of fence in order to get their children out.

“People support each other. It’s the sense of strength of a community where everybody does know each other and does talk to each other.

“Surely the message here from South Wales for the whole of the UK is strong communities do things together.”

Selena Adamiec, 36, told Mr Corbyn how she woke at 3am after hearing a massive “explosion” of the floodwater destroying a nearby wall.

“I’ve been here a year and have just finished decorating, that’s the sickening thing,” she said.

“I can’t thank you all enough. I have been on my own here with my son and the community has come together and that gets you through this.”

Another resident, Richard Oliver, 43, told Mr Corbyn how a couple of local residents cleared a nearby culvert of debris which allowed the floodwater to escape – otherwise it could have been worse.

“The force of the water was so strong, it was like something out of one of those disaster films,” Mr Oliver said.

“When the wall came down, it was a such a bang, and I managed to get up and get the floodgate up just in time.

“We just lost the carpets and managed to get the floodgate up in time. We are a lot more fortunate than other people.”