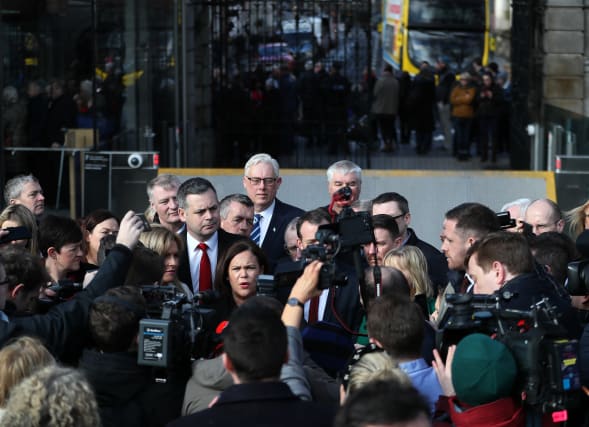 The 33rd Dail is sitting for the first time on Thursday some 11 days after the new political landscape became clear.

The 160 TDs gathered in Leinster House where all their names were read into the record by the Clerk of the Dail Eireann.

Procedures got under way at noon with Clerk Peter Finnegan reading out the Proclamation.

Voting has now started for the election of the Ceann Comhairle in a secret ballot.

Independent TD Denis Naughten was the first to make his pitch for the role of Ceann Comhairle.

He cited his experience as a parliamentarian at all levels, from TD to cabinet minister.

Mr Naughten said there is “public frustration” over accountability in public services.

“Getting straight answers to straight questions has become very difficult in Dail Eireann,” he said.

Citing the Health Service Executive, he said TDs have become “disempowered” since it was set up.

“Very often, the last person to know what is going on is the TD, the person who is meant to look after the constituents who are being directly affected.”

Outgoing Ceann Comhairle Sean O Fearghail told the Dail: “Four years ago I stood here seeking your support for election as Ceann Comhairle, then I was something of an unknown quantity to many of you.

“Today, I seek a renewal of that mandate hoping that my work over the last four years has assisted with the progression of the crucial Dail reform agenda to make our Dail more reflective and responsive to the needs of a national parliament in 2020.

“I work in the basic principle of respect for the mandate that each member of the Dail has received from their electorate.

“That mandate is in every respect equal and deserving of similar priority.

“In the 32nd Dail we worked together in more collegial fashion than ever before to create a progressive Dail reform committee at which each group in this House was represented.

“We achieved change by working collaboratively to alter how the business of this House is conducted.

“We established a fully representative Dail business committee which succeed for the most part in building consensus around the weekly Dail agendas.”

Ballot papers have been given to TDs with the secret ballot taking place in the voting lobbies in specially constructed booths.

The first job of the new Ceann Comhairle will be to seek nominations for the position of taoiseach.

The Ceann Comhairle will ask a member of the largest party in the Dail to nominate their party leader for the position of taoiseach.

However, a taoiseach is not expected to be elected as there is no party with a majority.

Ms McDonald said Sinn Fein will continue to speak to the parties who have a mandate for change.

“I also said that we will talk to everybody because that’s what you do in a democratic system, that’s what grown-ups do,” she said.

“I think it is a matter of great regret that Fianna Fail, in particular, continues to maintain a stance of excluding or ignoring or seeking to marginalise Sinn Fein, and not just us as elected representatives, but much more importantly, the hundreds of thousands of people that we represent.

“I do know this much, I know that nobody voted for a return of Fianna Fail and Fine Gael.

“I also know from speaking to people out and about, people of all politics and none, that any suggestion of return of the old Fianna Fail and Fine Gael government will cause huge disappointment right across the country and, I imagine, huge anger.”