The Home Secretary has hit back at business critics of the Government's newly announced immigration system, telling private sector chiefs it is "about time" they started training up Britons.

Industry leaders warned that changes to UK immigration rules could "spell absolute disaster" for the care system as well as farmers, builders and hospitality businesses.

But Priti Patel said industries relying on a migrant workforce should look closer to home when recruiting new employees.

"It is about time businesses started to invest in people in this country," she told Sky News.

"We have over eight million people – that is 20% of the workforce – aged between 16 and 64 that are economically inactive right now.

"It is down to businesses to work well with the Government and join us in investing in people, levelling up across the UK so we can have wage growth across the entire country." 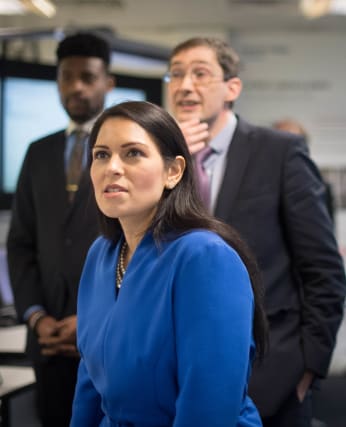 The Cabinet minister said it was "ridiculous" to suggest the Home Office was putting the brakes entirely on businesses recruiting from abroad.

She said workers could come to the UK as long as they were sponsored by an employer and met the points-based criteria, including earning at least £25,600 in skilled professions, as part of changes that will come into force next year.

"If they have an employer and they meet the skills and points threshold, then of course they can come to the United Kingdom to work," Ms Patel added.

"It is ridiculous to imply that we are just shutting down routes and that people can't come into the UK."

The changes, announced on Tuesday, are designed to cut the number of low-skilled migrants entering Britain but aim to make it easier for higher-skilled workers to get UK visas.

A policy statement outlining a new points-based system after freedom of movement ends said the economy needs to move away from a reliance on "cheap labour from Europe".

The salary threshold for skilled migrants will be lowered to £25,600 for those coming to the UK with a job offer, and there may be concessions for those earning no less than £20,480 as long as they still meet certain requirements or their occupation is short of staff.

The Confederation of British Industry warned that care, construction, hospitality and food and drink companies could be most affected by the changes.

Industry and union leaders hit out at the lack of provision for low-paid workers in the proposals.

Dame Donna Kinnair, chief executive and general secretary of the Royal College of Nursing, raised concerns that the proposals will "not meet the health and care needs of the population".

The UK Homecare Association said it was "dismayed" by the proposals, adding: "Telling employers to adjust, in a grossly underfunded care system, is simply irresponsible."

Mark Harrison, of the Food and Drink Federation, raised concerns about bakers, meat processors and workers producing food like cheese and pasta not qualifying under the new regime.

National Union of Students president Zamzam Ibrahim called for the minimum salary threshold to be scrapped.

"Salary thresholds will prevent colleges and universities from recruiting the staff they need to educate our students and deny future students the opportunity to learn from those with international backgrounds," she said.

According to a Government policy paper published this week, the "firm and fair" system is designed to "attract the high-skilled workers we need to contribute to our economy, our communities and our public services".

But it added: "We will not introduce a general low-skilled or temporary work route."

The EU Settlement Scheme, designed to give EU citizens permission to stay and work in the UK after Brexit, will "provide employers with flexibility to meet labour market demands", the paper said.

Expanding a seasonal workers scheme and arrangements with eight countries to welcome young people to the UK will also help employers but they are expected to take "other measures to address shortages", the paper said.

Employers have until January 1 to meet the requirements and ensure their staff have a right to work in the UK.

EU and non-EU citizens will be treated equally with criminal background checks carried out on everyone coming to the UK, affecting applications of anyone who has been given a prison sentence of 12 months or more.

People who want to live and work in the UK will need to gain 70 points to be eligible to apply for a visa.

Top priority will be given to those with "the highest skills and the greatest talents", like scientists, engineers and academics, who may not need a job offer to be allowed in.

Other points will be awarded for certain qualifications and if there is a shortage in a particular occupation.

The Liberal Democrats claimed the proposals were based on "xenophobia" and Labour said the system would need so many exemptions it would be "meaningless".